'Ello everybody. Belly Button 9 is up and running on the front page of the site this week, with numero 10 being right on its heels, and #11 not very far behind at all.

This week I've been hard at work as usual, and have a snippet of comics goodness for you to feast your eyes on. This is one of my 8 pages for Accent UK's upcoming Robots Anthology. Last year I did the Zombie Interviews, guess what I'm doing this year. 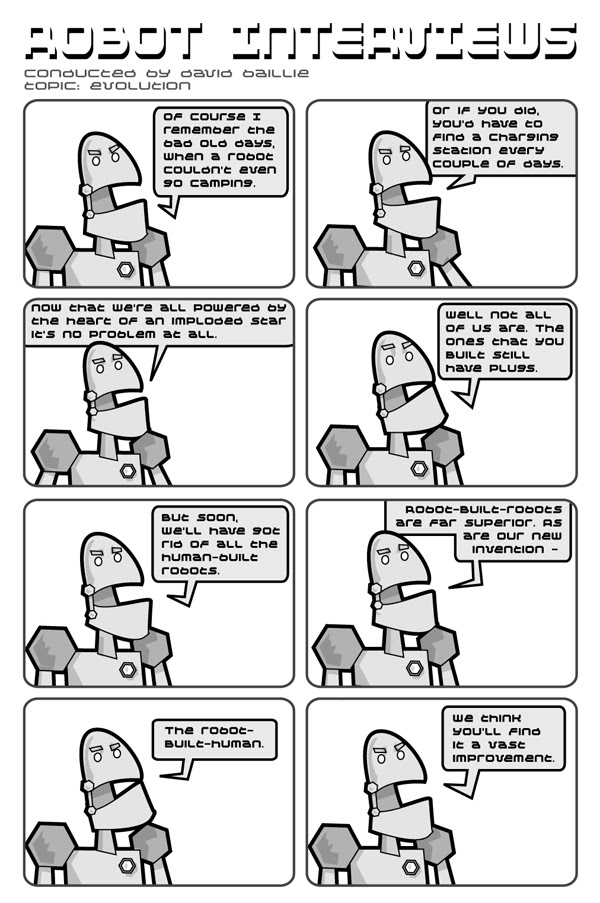 Sometimes being an artist is all about just finding your niche.

A really cool guide on how to make webcomics at comixtalk.

The human species may split in two:

Humanity may split into two sub-species in 100,000 years' time as predicted by HG Wells, an expert has said. Evolutionary theorist Oliver Curry of the London School of Economics expects a genetic upper class and a dim-witted underclass to emerge.

The BBC used this photo for the link to their story on Bush visiting the site of last week's California fires: 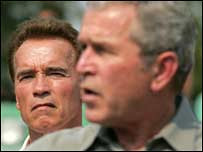 (Isn't that great?)
Austin Kleon's blog has a bundle of really interesting stuff on it, but this post in particular really tickled me. It's a page from Adrian Tomine's sketchbook on Why It Sucks to be a Cartoonist, and the following snippet from an interview.

"I went out to dinner with my wife at a sushi place in Brooklyn. Right as we were seated at our table, the couple at the adjacent table begins the following exchange:

WOMAN: So, did you read that book I gave you?

WOMAN: The comic. Summer Blonde. [Whcih is one of Tomine's books]

Sci-Fi.com has video of a recent London interview with William Gibson up on its new TV channel.

And speaking of Mr Cyberspace, I found this great quote on his wiki page:

"Maybe I'm a romantic, but I think in the old days it was done by guys who couldn't do anything else, guys like Phil Dick. That's all he could do, sit there and write endless novels. These are the people Bruce Sterling calls "Paranoid Pervert Saints of Science Fiction." They were pariahs of literature, whipping these strange ideas around. When I was a teenager growing up in southwestern Virginia in the 1960s, SF was absolutely the only source of subversives ideas that I had. I used to read these books and think, "Wow! No one knows I'm reading this!" It was below people's attention. Well, that subversive level of science fiction has fallen off terribly. The bulk of this stuff is consumer product, dog food, and there's so much of it. When I walk into an SF bookstore, my head swims. I remember when I could buy every new SF paperback published in America every month, because there were two."

That's it from me for a few days.
Until next time - behave yourselves!

db
at November 02, 2007
Email ThisBlogThis!Share to TwitterShare to FacebookShare to Pinterest

RE: CA fire picture...
It's all about priorities! You should've seen the press conference with the Governator and the San Diego council member for the neighborhood hardest hit. She said into the mic after Ahnuld promised all of his support for 'Diego, "When you were in Malibu, you gave the council member there a hug. Do I get one too?"

Did you know that Andy drove into 'Diego the night before all Hell broke loose? He drove back down there just yesterday and said that the fire did indeed burn into the Pacific.

Wow - it's totally crazy!
Did the council lady get a terminator hug? I can't imagine why she'd want one...

Sure, it sucks to hear someone doesn't like your work (like with Tomine), but at least he now knew 2 people had read it!

Yo Dec, yeah I 'spose you're right. Although can you imagine sitting there listening to someone take your work to pieces while you're trying to enjoy the fish?

I once went to a party and one of my comics (Mindy Pool) was in the toilet. I really hoped it was in there for people to read...