Every week, without fail, for the past sixteen and a half years I have bought 2000AD. This week I did not. Let me explain why...

I'd been peripherally aware of 2000AD for most of my youth, but didn't really take notice of it until I was about twelve or thirteen. The comic itself came into existence seven months before I did, February of 1977, so I missed out on grabbing issue (Prog) number 1 and I hate coming late to the party. 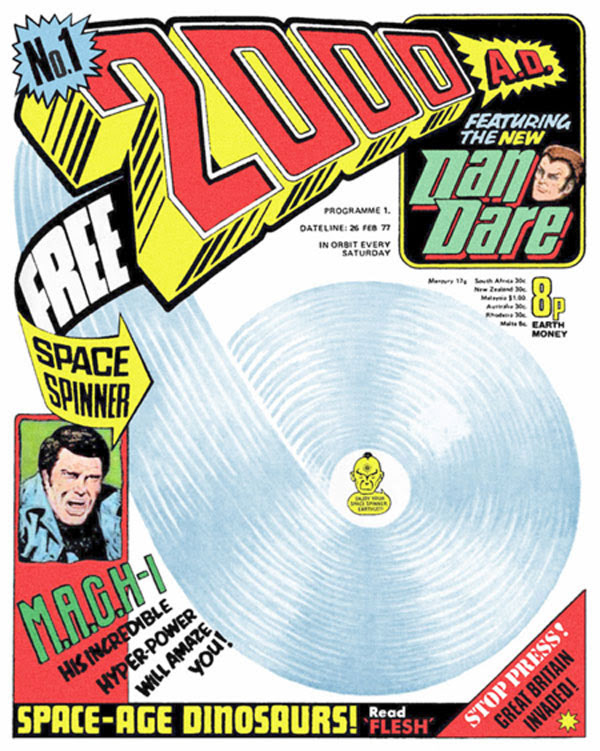 I remember having the mumps when I was about seven. Before the pain and discomfort kicked in, I was actually quite pleased with my latest viral acquisition. Three weeks off school - it was like a dream come true. I even got to read comics in bed all day. My mum bought me the first couple of issues of The Best of 2000AD, a bumper reprint magazine. I devoured it. And then ate some soup.

In those comics I met Abelard Snazz the man with the two storey brain, Strontium Dog and Judge Dredd himself.

Years later I'd pick up an issue of 2000AD in the newsagent near my Gran's house (run by a man called Jim, who I was always a little bit scared of) because Strontium Dog Johnny Alpha was on the cover. Unfortunately he died in that episode. Horribly.

He was gutted by a giant dragon monster. 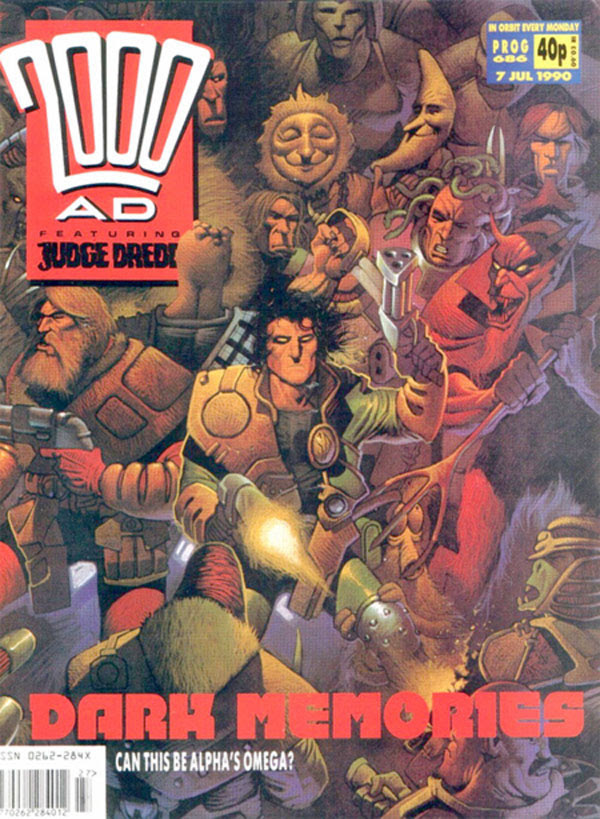 It was Esther, the lady who ran (and still runs) the local corner shop who gave me my first 'run' of 2000ADs. Someone had ordered the comic from her but failed to pick it up, meaning that she had a dozen or so (sequential!) copies lying around the shop. Memories of Johnny Alpha screaming in agony flooded back as she handed me the generous bundle of gifts. I was grateful, but a little bit wary. Did they murder major characters every week? Luckily they didn't (although now I think of it, that's not a bad idea). 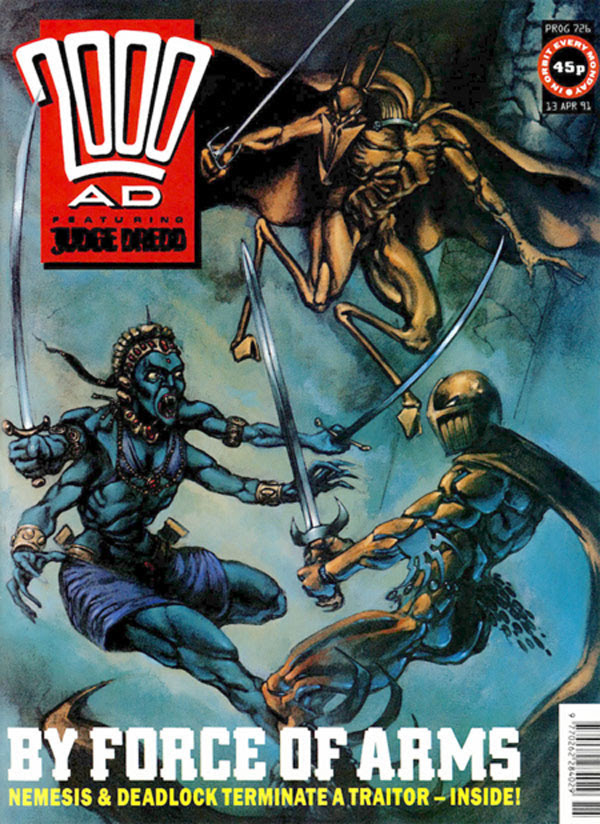 It was the Barras Market in Glasgow that made me a fanatic. I have always loved markets, old fusty markets with books and comics and bits of stuff that no one wants. That's where most boys of a certain age are likely to find find treasure, and that's where I used to pick up most of my comics. You cannot imagine how excited I was when I discovered a stall in an enclosure near the world famous Barrowlands that was selling hundreds of 2000ADs... For ten pence each!

I'd recently taken up boxing to beef up my skinny frame and it was just as well. Not because I had to fight anyone for the comics, but it meant I could carry more home. I remember that walk to the bus station felt like it was going to take forever, my rucksack jammed full and the handles of eight plastic carrier bags, pulled into razor wire by the sheer weight of what I'd bought, slicing into my iced, numb hands.

And so I began to build up a collection of old 2000ADs, stretching back to when it (and I) was only a couple of years old. After I drained that stall of its stock (multiple visits were required), I hunted down other venues for cheap back issues, rarely having to pay more than thirty pence for a single Prog.

A few weeks later I was waiting in Buchanan Street Bus Station with my mum. We were off to Manchester to visit relatives, and I was looking forward to the five hour coach journey. My travel bag contained a spare t-shirt, some underwear and a hundred or so 2000ADs. If the driver had suddenly announced that the journey was going to take ten hours, I'd have probably thought, 'Great I might be able to finish all these!'

While we waited for the bus, something caught my eye in the newsagent kiosk window. Something explosive, glamorous and with a familiar logo... 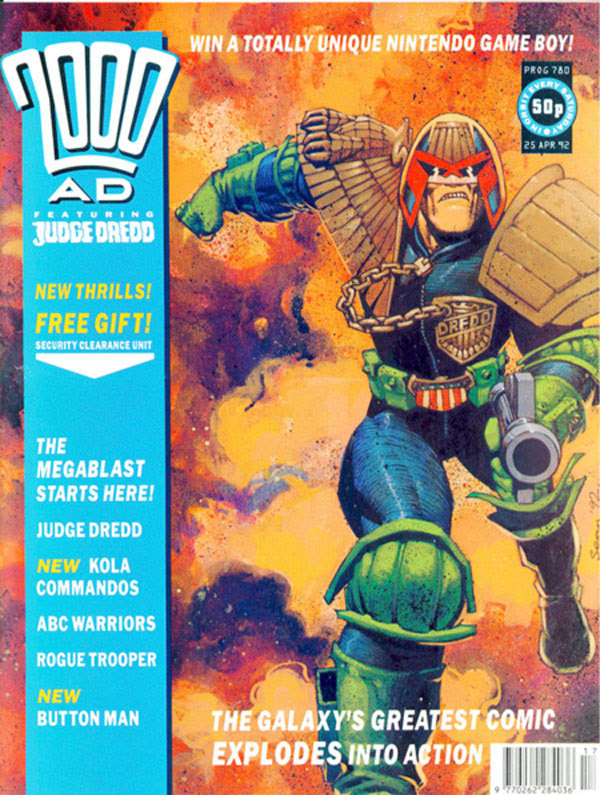 I had to have it. Even though it cost fifty pence. And I did - Prog 780 was my first weekly purchase. I kept the free plastic wallet that came with that issue - it held all my fake IDs when I went to University - until it dissolved years later. Ennis and Gibson on Dredd, Kola Kommandos, Kev Walker's gloriously painted ABC Warriors and a Future Shock by Jeff Anderson (who I knew from Transformers comics) - it was an absolutely amazing package.

I can chart most of my life through 2000AD, and remember exactly what I was doing and what was going on when any given story was running. Rifling through my back issue collection when I visit my parents is like picking up and dipping into the diary that I never wrote.

And so, sixteen years later, Prog 1611 has just hit the shops, and I'm not going to buy it.
Why not? Because they sent me comp copies last weekend, so I don't need to. 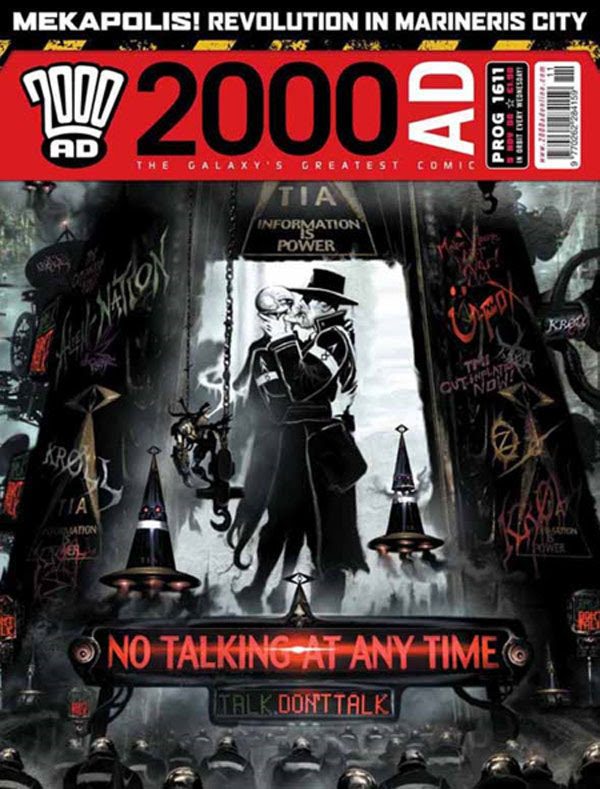 My first story for 2000AD is called The Lie and it's drawn by Nick Dyer, whose stuff I've admired in Futurequake productions for ages now. I couldn't be more proud of it, and hope you like it if you get a chance to pick it up and read it for yourself.

It was great to have something in Judge Dredd Megazine for most of last year, but to have my work appear in 2000AD, a comic whose history is so entwined with my own, feels incredible. It's like I've joined a rich comic tapestry that also includes Dredd, Alpha and Bix Barton, Hewligan's Haircut and Time Flies, Joe Pineapples coming out while I sat on the community centre wall talking to my mate Joe, finding out that the Dead Man was Judge Dredd while listening to Atlantic 252 in my gran's spare room one summer, discovering Slaine, Halo Jones and Hap Hazzard, Alan Moore, Grant Morrison, John Smith, Peter Milligan, Pat Mills, John Wagner, Alan Grant... I know my story is but one stitch in the gigantic thirty year rug of 2000AD, but what a thing to have a stitch in!
at November 07, 2008
Email ThisBlogThis!Share to TwitterShare to FacebookShare to Pinterest

Fantastic news, Dave! I'm really chuffed for you. Will pick up a copy tomorrow.

I just heard, so i think i'm too late to pick up a copy, but give me a heads up next time. Do you have something coming up in future?

and I loved the comics I bought off you in Brum a while back as well.anything coming soon I can get my grubby stubs on?

Congratulations, mate! If I wasn't in LA, I would buy a copy. If you had a spare, I would buy it off you. Speak to you when I get back...

declan shalvey, you can pick up back issues from the www.2000adonline.comshop. I'm not sure the shop section is up yet, but there is a number there you can use.

Oops. Commented about your story over at EW, failed to look over here.

Great post, David. My own arc with 2000AD isn't dissimilar, though I think instead of market stalls, I found most of my early copies of the comic at local community centre "car boot" type things - the only place where comics are more devalued than market stalls.

You could pick up fifty issues for a quid, or a pile of Commando or Starblazer books as long as your arm for not much more, so my 2000AD collection wasn't as hard won as yours, and my comic stories all rotate around US comics.

Your story, incidentally, is great. Haven't been reading 2000AD much recently, but I found that issue, and can't wait for the next story you get in there.

This is my first time i visit here. I discovered so numerous interesting stuff in your weblog especially its discussion. From the tons of comments on your articles, I guess I am not the only one having all of the enjoyment here! maintain up the great work.

Well done!...and nice twist in the telling. This is similar to my experience (although a little further north than yourself, David!), I was sick in my bed and my mum brought me a bunch of comics (and Lucozade) -so it goes. One comic stood out, I read 'Destiny's Angels', some Fink was gonna kill Dredd's wife!!... and I was hooked. I spent the following summer hunting down every kid I knew that had read 2000AD, in that way I caught up with back issues. I'd actually read Johnny Alpha in Starlord years earlier when we lived in Rutherglen, so I was delighted to see he survived that comics collapse. I wanted to be an artist from that point on. I moved away from comics and studied painting. But it was this that lit the fire. Last year I challenged myself to draw a Dredd strip...could I even do it? I'd just been a punk when I last thought about it, I knew nothing.... So I made the following sample, 20 years on, as a gift to that wee sick boy I once was.