Ok - well seeing that you just got here, I suppose it would be rude to drop links everywhere, suggesting that you leave so soon.
Not that that's going to stop me...


A while ago I linked to ASIFA's posting of the first part of Byrne's Complete Guide to Cartooning. Well Parts Two, Three, Four and Five are up now, too. Similarly - Cartooning for Profit parts One and Two are also available on from some kind blogger's blog. All of this material is long out of print and would cost a fortune to buy second hand - so go download!


Your sci-fi BBC stories of the week are:
Robot Bear to Rescue Soldiers and Wireless Energy Soon to Become a Reality.. 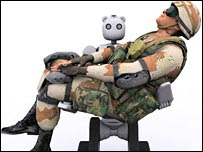 And I thought this was great: The Losers Guide to Getting Lucky...

And on a completely unrelated note - meditation napping sounds good. I'm going to have to try it...

Two weekends ago Jen and I rescued a magpie that was stuck up her parents chimney. We coaxed it down with a piece of bread, then I (gently) grabbed it and let it free in the back garden. Watching it figure out how to could climb down from the flue ledge was like sitting in a front row seat during the filming for a David Attenborough film.


I was sad to hear that Daniel Robert Epstein died a couple of weeks ago at the tragically young age of 31. I met DRE (as he was affectionately known to his friends and fans) at the New York Comicon last year when I crashed an inane press conference for a sci-fi film starring Milla Jovovich. He was the only journalist in the room to ask interesting questions and afterwards he said hi to Joel, whom he obviously held in high regard. Joel introduced me - but I thought DRE was too busy gushing about how Tripwire had inspired him to really take any notice of me. I was pleasantly surprised when he stopped me later in the year on the convention floor at San Diego and asked how I was.
Suicide Girls have a touching obituary here.


Last week Jen surprised me with a trip to Stratford Upon Avon for the last night of Trevor Nunn's lauded production of King Lear, with Sir Ian Mckellen in the title role. It was completely sold out, but luckily Jen managed to get a couple of tickets from the kind and talented Scot Sylvester McCoy, who was playing The Fool, who she worked with a couple of years ago. Afterwards we popped round to say hello and thanks and I had a bit of a geekout moment and couldn't think of anything to say but 'Thank you, thank you - it was great!' If only my eight year-old self could see his twenty nine year-old counterpart shaking hands with Doctor Who.

And to finish up - a picture from my Out tray. This is an illustration I did for an article in the new Tripwire 2007 Annual about London production houses. I am quite happy with how it turned out:

And have you all picked up this month's Judge Dredd Megazine - my column this week is about A World Without Deadlines. It also sports an 8 page story drawn by my mate Dec Shalvey, and a cracking interview with Carl Critchlow by the Marvelous Matt Badham.

I'll be back in a few days with another satchel of links and more news from the front line.
Later.
at July 07, 2007
Email ThisBlogThis!Share to TwitterShare to FacebookShare to Pinterest

Yes, but have you had any nice pasta recently?

No - but I have just had a lovely minted lamb kebab, on a bed of couscous...