The truly intelligent among you have probably figured out that 2 + 2 = my web site was hacked. I wasn't the only one - a bunch of comics/arty people lost their blog last week to the dirty drug peddlers. No big deal. FTP passwords have been changed and lookouts have been posted.

If it happens again and it looks like I haven't noticed can someone drop me a mail?


Joel asked me if I could mention that the Tripwire Annual is being solicited in this month's Diamond Previews. I said I could, but on one condition and he agreed. 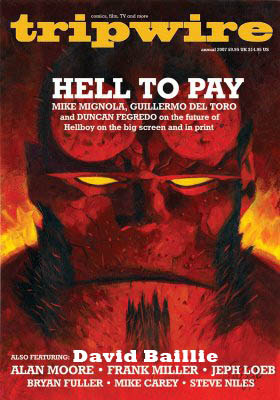 Please feel free to spread the word (and the new cover). And remember to order yourself a copy - two pages of brand new comic in there from me... That makes it worth about twice as much as Joel's asking for it!

As soon as I started making my own comic, I began coming up with ideas for how comics worked. And as early as 1986 I had already begun to collect ideas for a comic book about comics. But it wasn’t until about 1989 that things got serious. One of the things that was happening was that my notes were getting so thick—this little file folder that I had was getting so heavy that it was actually falling off those little hooks that you have in file folders.

The Believer has a good interview with Scott McCloud.


Has your MP received a pile of postcards yet?
If you haven't taken part in The Big Ask, why not?


If you click on the ART tab at the top of the page (or here) you'll be taken to my gallery section, which has recently been updated.

Is anyone going to the party tomorrow night? If so, I'll see you there.
And so will The Bat.
at April 24, 2007
Email ThisBlogThis!Share to TwitterShare to FacebookShare to Pinterest

I've been chatting to Joel about maybe changing the name of next year's annual. Obviously this one has been solicited already, so they're kind of stuck with the Baillie-less title.

Now instead of working, I'm going to go and read what you've been up to at your LJ.