Did you miss me?

As my radioactive super powers (see two episodes back) dwindled (I knew they'd only be temporary, it's okay) I found I was pushing myself closer and closer to the limits of my endurance. My week-long battle with The Mosquito (supernaturally resilient enemy of all sweet-blooded Scots the world o'er) is now at an end, and even though I am covered in unattractive welts the size of old fifty-pence pieces, I can announce I was victorious.

So what has happened since the last time I checked in?

Well for Jen's birthday we had dinner at the best table in Ronnie Scott's in Soho. As a result we ended up getting what might as well have been a private performance from Joan Armatrading. Her feet were about six inches from our table as she stomped through her set. And I got one of her plectrums afterwards.

I used to collect plectrums. Years ago. When I had long hair and you could see my ribs through my clothes. I have plectrums from Bush, Rocket from the Crypt, Skunk Anansie and Sonic Youth gigs.
And now Joan Armatrading.

And last week, after a scintillating evening at the NFT I have a new obsession.
Jodorowski.

I'm looking for a transcription of the two hour talk, if anyone finds it before me can you let me know?

The Prince Charles cinema has an announcement:

"I don't know, Quentin Tarantino has never turned up here and they name the bar after him, it's my second visit and they haven't even named a toilet after me!"
Kevin Smith, April 2007

In response to Kevin Smith's comment about Tanantino getting all the spotlight at the PCC, we have now dedicated the first cubicle in our Gents toilets to the Clerks director. Please come and spend a penny next time you are at the PCC!

Also worth noting is that the PCC has pledged to show An Inconvenient Truth every week throughout 2007. Do yourself a favour and go see it.

The Jazz, a new radio station by the people who run Classic FM is now live and playing very cool stuff. (Or at least it has been when I've tuned in).

An interesting article about Scott Adam's favourite subject, free will over at FT.

If I had free will, I would choose to be funnier. I would choose always to have the right witty riposte ready to disarm adversaries and delight friends. But sadly, it is not so. My lot is for the same lame old gags to hobble out whether I will them to or not, like embarrassing aunts at a wedding.

Indeed if we had free will, we might all choose to have the punning powers of the Two Ronnies, combined with the benevolence of Bob Geldof. But we do not. And that is a fact, laboratory proven. 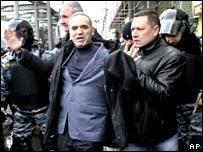 Russian opposition activist Garry Kasparov was among about 170 people arrested as police moved against a banned anti-Kremlin rally in Moscow. The former chess champion was freed several hours later after being fined $40 (£20) for public order offences.

One of my favourite cartoonists Brian Ralph talks to The Baltimore Sun...

Ralph first earned acclaim in the so-called underground comic world in 1999 when he released his graphic novel debut, Cave-In. His wordless tale of a cave explorer's adventures was nominated for several awards and named one of that year's five best comics by The Comics Journal.

Ralph worked on Cave-In while living at Fort Thunder, a large warehouse in Providence, R.I., where he said about 10 artists lived together. The residents divided some of the warehouse into private rooms but left open space for punk-rock performances, steel-cage wrestling matches and anything else they could imagine, Ralph said.

Fort Thunder inspired the story line for Crum Bums, in which the primate protagonist arrives in a post-apocalyptic future and must find his way home, Ralph said.

"Living at Fort Thunder reminded me of the apocalypse," he said.

And another, Giles Andrea, who (little known fact) is the genius behind the Edward Monkton range of cards, mugs, t-shirts cuddly toys etc. etc. etc. recently landed himself £3.3 million by selling of his previous creation Purple Ronnie.

Maya Dern's short films are all up on the web apparently. If you're bored and confused this is where you should be. 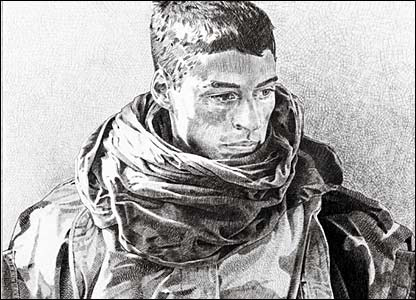 Years after Michael Fay posted a picture of Nick Ciccone on his blog, he heard from Ciccone's stepbrother the marine had killed himself. But the picture "made him alive for them".

I recommend you go look at US Marine artist's Michael Fay's work at the BBC.

Both Matthew Craig and Jinty Scott graced the radio waves with their wit and wisdom in the last couple of weeks. I can't find listen again links for either programme, though, so you'll have to make do with a Radio 4 documentary by Stephen Merchant about one of my favourite TV shows ever, Taxi and the first episode in a new series from The Cowards, who I was raving about after seeing at last year's Edinburgh Fringe. Both are required listening.

The Hugo Nominations are in, and most of the short stories are free to read on the web. Stick them on your favourite portable e-book reading machine and enjoy.


On the train back from Bournemouth last Friday I noticed a gaudily covered paperback sticking out of the refreshment trolley. Upon craning my neck I saw that it was a Vonnegut.

I asked the trolley man if it was Slaughterhouse 5 and he said it was. Then he told me that he'd bought it because he'd read that Vonnegut had died.
'Died? When was that?'
'Yesterday, I think.'

I got off the train at Waterloo and walked up to the NFT (to see El Topo and the Jodorowsky talk). On the way I stopped and browsed the book market under the bridge and bought a Vonnegut novel I hadn't read. 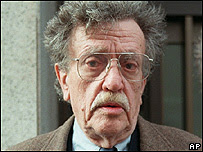 "When I think about my own death, I don't console myself with the idea that my descendants and my books and all that will live on. Anybody with any sense knows that the whole solar system will go up like a celluloid collar by-and-by. I honestly believe, though, that we are wrong to think that moments go away, never to be seen again. This moment and every moment lasts forever."
"Wampeters, Foma & Granfalloons," 1974.

The LA Times has a meaty and interesting obituary online.

This year, for no particular reason, I've been exclusively reading biographies and non-fiction but last year the best book I read was God Bless You, Mr Rosewater, by Kurt Vonnegut. In thirty years of reading I have yet to find anyone with a more masterful command of prose. He was also able to say more about the human condition in a single paragraph than most authors manage in an entire novel.

Go and read either Slaughter 5 or God Bless You, Mr Rosewater if you haven't already.

And then go here and listen to him talk at the BBC.

A gardener has decided to down his tools at the age of 104. 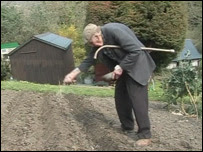 Richard Ward, landlord at the New Inn, said: "The only reason he's retired is he can't get up on his tractor to bring the lawnmower down.

He puts his longevity down to having "plenty to do and being interested in it" - as well as a bit of his "medicine" - whisky.

I'm off to see if Taxi is on any of the 999 TV stations we get pumped into the house. It's the only thing I'm in the mood for.

Next update Tuesday.
at April 19, 2007
Email ThisBlogThis!Share to TwitterShare to FacebookShare to Pinterest