Being freelance is fabulous in the summer. It's more difficult to keep the enthusiasm pumping when it's grey outside and you're rationed to just five hours of proper sunlight every day. On days like these there's nothing like (unsolicited) kind words to spur you on.

Earlier this week a friend emailed to congratulate me on some comics of mine that he'd just read.

Left musing that at some point you're going to create one of the great British graphic novels; something contemporary probably, about life, death, family, friends, love and all that shit...

Which is maybe the nicest thing anyone's ever said about my work...

Two other guys who are far kinder than they need to be about my stuff are Joe and Richard at The Forbidden Planet Blog. I love the blog - it's a one stop shop for comics news and criticism, especially if your tastes lie a little outside of the mainstream.

Last month they asked for artists to contribute something to celebrate National Poetry Day and I couldn't resist.

(Warning - partial nudity coming up... Actually - not that partial now I come to think of it...) 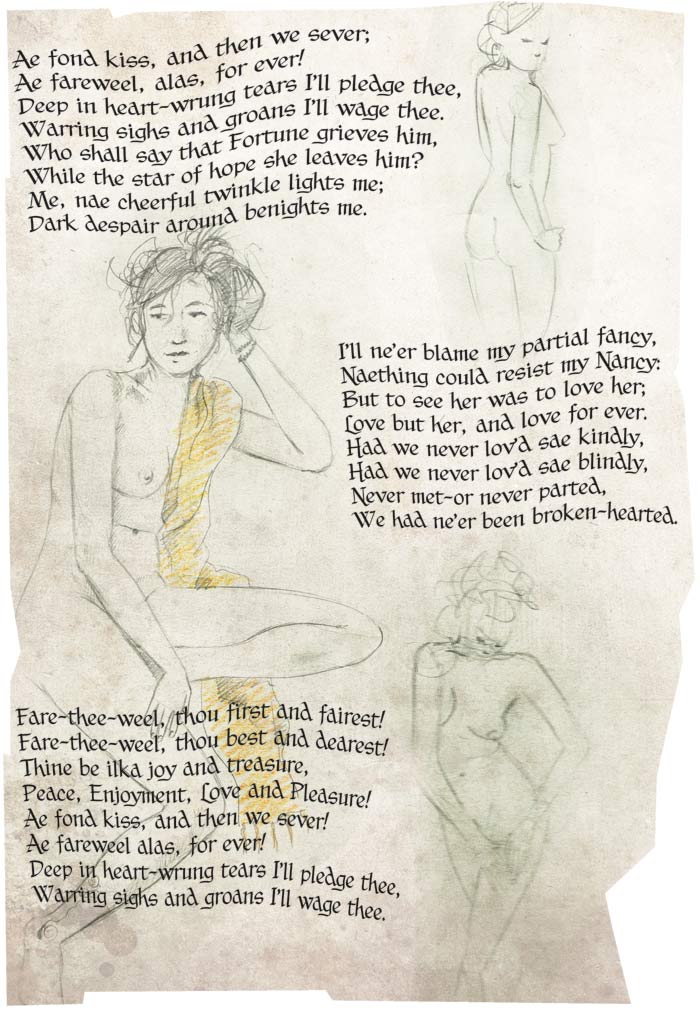 Ae Fond Kiss is one of my favourite poems. Good old Rab.


I'm going on bit of a trip next week. Tuesday is the grand opening of the Frankophilia! exhibition at Salford University, which promises to be great fun. It even made it to the BBC News website.
(Mine is the second picture in the slideshow... My name even pops up if you hover your mouse over it...)

Then Saturday is the Thought Bubble comic convention in Leeds, which is always worth that long trip north. It seemed a bit daft to come back to London between the two, so I'll be staying up there partying, hopefully saying hello to friends and family and working on the move.

Speaking of which - the first wave of BASTARDS nudey commisions (see below if this doesn't make any sense) are all done, dusted, packed and posted now, but if you're going to be at Thought Bubble next weekend I can bring along any purchases and hand-deliver them - as long as the order comes in before Monday evening.

PAYPAL buttons:
BASTARDS 2
£10 - sgned and accompanied by a nude drawingof the celebrity of your choice.
(Just fill in the name of your desired celebrity in the details box below.)

BASTARDS 1&2 bumper pack
Same as above but with last years BASTARDS collection added in - all for just £14!


(And speaking of The FP Blog here is their review of BASTARDS 2)
at November 12, 2010
Email ThisBlogThis!Share to TwitterShare to FacebookShare to Pinterest