Everyone else is out and about, getting ready for the weekend and I’ve just come home from ‘work’ and I’m now getting ready to work.

All of a sudden I remember how tough it was having a day job and trying to squeeze in a few hours of writing or drawing in the evening.

I grabbed a coffee in the pub beside the tube station and walked home through the park, hoping the combination of fresh air and caffeine would wake me up a bit. I needn’t have bothered because about ten paces along the path there was a big, fat dead rat staring up at me – mouth open and tongue hanging out.
I nearly shit myself.
Wide awake now.

Last night I went along to see Principal Theatre’s annual Shakespeare production. This year they’re doing A Midsummer Night’s Dream – and it is great. It probably goes without saying that Jen was musical director and she excelled herself on this occasion. The faerie songs are incredible! It’s on every Thursday, Friday and Saturday until the 19th of August in Coram’s Fields. The show starts at a quarter to eight – and it’s all outdoors so take a blanket or warm coat.

I promised two more San Diego anecdotes and a picture, didn’t I?
Here you go…

So I was staying out by the beach, rather than near the Convention Centre, like last year. The bus into town from Obi (that’s Ocean Beach – rather than any geeky Star Wars allusion) only takes twenty minutes so it’s no big deal. One morning, while I was waiting at the bus stop, a taxi pulls up and asks us if we’re going to the Comicon. Five of us are, so the driver offers a deal and we all jump in.

Conversation doesn’t exactly flow, and it’s getting a bit awkward in the back as my four co-passengers are quite tightly wedged in there. The driver asks me where I’m staying and I tell him I’m staying in a hostel type setup with five girls. The four guys in the back seem to get quite excited by the thought of this.

Second anecdote – a short one as it’s time to get on with something else…
Samuel L. Jackson was the star guest at the convention this year. His Snakes on a Plane panel was jam-packed and the queue to get was about a mile long. Word has it that he really wanted to see the con floor, as he’d heard it was pretty cool, but knew he couldn’t as he’d get mobbed by Star Wars geeks and autograph hunters…
So his PR guys went out and got him a Storm Trooper helmet.

And he walked around for a few hours on Saturday completely unrecognised.
But a bit hot. 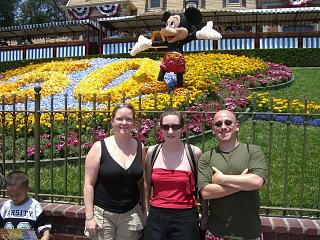 Me and the girls at Disneyland before SDCC 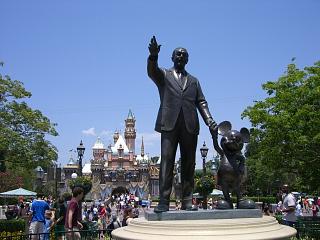 Walt Disney with some rodent

On the con floor - was this a celebrity in disguise?
at August 04, 2006
Email ThisBlogThis!Share to TwitterShare to FacebookShare to Pinterest