A couple of weeks ago I had a dream. I dreamt that a show that Jen is working on was going up to Edinburgh for the Fringe. The problem was that they were trying to cut costs and were looking for someone to take the place of the expensive West End leads. Somehow myself and Joel Meadows got roped into it. I can’t sing a note. I’m guessing he can’t either. I was bricking it, but Joel just shrugged and said ‘Oh, well… The money’s good.’ 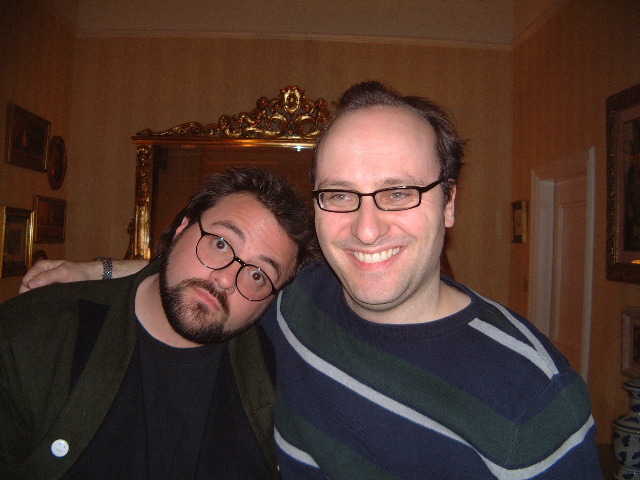 He’s the one on the right. The other guy is Kevin Smith.

A week or so ago I got a call. Leon Hewitt wanted to interview someone, his mate PJ wanted to photograph someone, Matt Badham* wanted to get rid of some books, Baz wanted someone to sleep on his couch and Bridgeen wanted someone to keep her company on the train. And so I travelled north for another BazFest.

Then I went to Edinburgh for the Fringe (but not to sing in a musical). I met up with Neil and James (both avid fans of this blog – hi guys!) and saw some shows. My only is that we only made it into town for one late night. Next year I’m definitely going up for longer. Jen’s mate Gadget got us into a couple of shows. I want mates with names like Gadget. I tried to convince the lads to change their names but neither of them were for it.

Shows I saw and can heartily recommend:
The Cowards (a surreal sketch troupe who’ve just been commissioned to write a series for BBC Radio)
The Family – Semianyki (Russian clowns who made an impression on EVERYONE in the audience)
Little Red Things (a lovely fairy tale set in a forest and starring lots of little red things)

The Cowards
I have a ton of email to read and maybe even some voicemails I can’t listen to. But more importantly I have to colour a giant gorilla being wooed by a cowgirl.

* Fate of the Artist and Ad House’s Superior among them. Both superb!
at August 29, 2006
Email ThisBlogThis!Share to TwitterShare to FacebookShare to Pinterest