THE BLOG IS DEAD

(I mean the blog as a medium.
This blog is merely sleeping.)

I really miss writing the blog so I'm determined to make a proper return this year - especially since blogs are officially dead and everyone's moved over to permission marketing / newsletters. One of my most endearing qualities is the way I jump on bandwagons that everyone else has already abandoned.

Couple of things before returning to hiatus:

I'm very excited to say that I'm writing the next Chopper saga, Wandering Soul, in Judge Dredd Megazine - with art by Brendan McCarthy! I rave about what a dream come true it was to be asked to write Chopper - probably my favourite AD character - over at the 2000 AD Blog, and it's honestly true. I also had a quick word with SFX Magazine about the upcoming series (I haven't managed to leave the desk to track a copy of the magazine down but someone at the 2000 AD office did - evidence to the left!)

Five episodes, each chapter consisting of ten pulse-pounding pages - meaning that Wandering Soul is fifty pages long, just like all of the best Chopper sagas. (Go check!) I've been channelling my inner Wagner and I really hope you like what Brendan and I have cooked up.

In other news I also appear, as a talking head, in a new film by the Scottish Parliament's cross-party forward-focused think tank Scotland's Future Forum - alongside Scotland's First Minister Nicola Sturgeon, award-winning actor Brian Cox and world-famous crime novelist Christopher Brookmyre. They also included a bunch of my artwork, which was very cool to see on the big screen - and made a nice change from looking at my face.


It was great to be invited to Edinburgh for the premier and a QnA session - it's not every day you get to visit a Parliament building you actually voted for and then hang out with Hollywood royalty while eating free canapes.

Other recent opportunities to get sick of my voice and/or face include a chat I had with the awesome Working Comics podcast and an interview in The Herald newspaper. (Front page! Double page spread! Photo from my appearance at last year's Edinburgh Book Festival!)

Gaze upon my visage, and make sure you don't get confused about which headline applies to me. 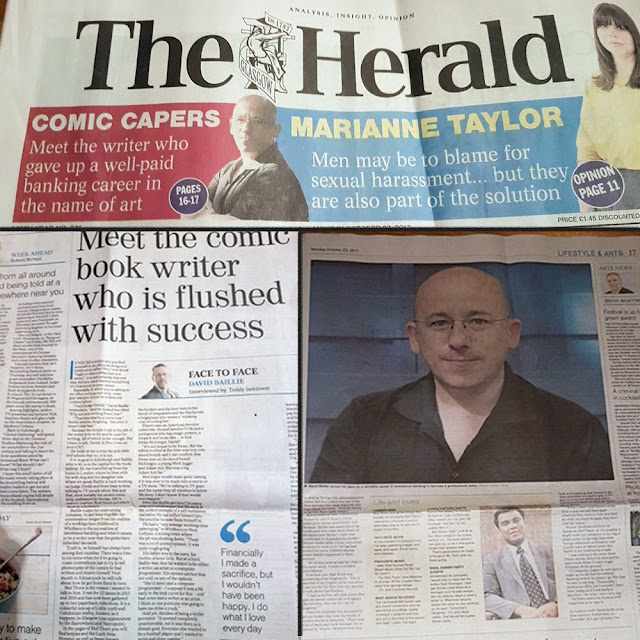 db
at August 31, 2018
Email ThisBlogThis!Share to TwitterShare to FacebookShare to Pinterest