Many, many, many* years ago I wrote a monthly column for the Judge Dredd Megazine. I don't have it to hand but I remember one in which I recommended ditching New Years as the time to begin life resolutions, as chances are you'll just be distracted by everyone else's blathering and failures. Instead, my younger, more boisterous and confident self wrote, why not use your birthday as a far better occasion upon which to take stock of what you've done in the last year and figure out what you need to fix for next.

And then last week this took me by surprise**: 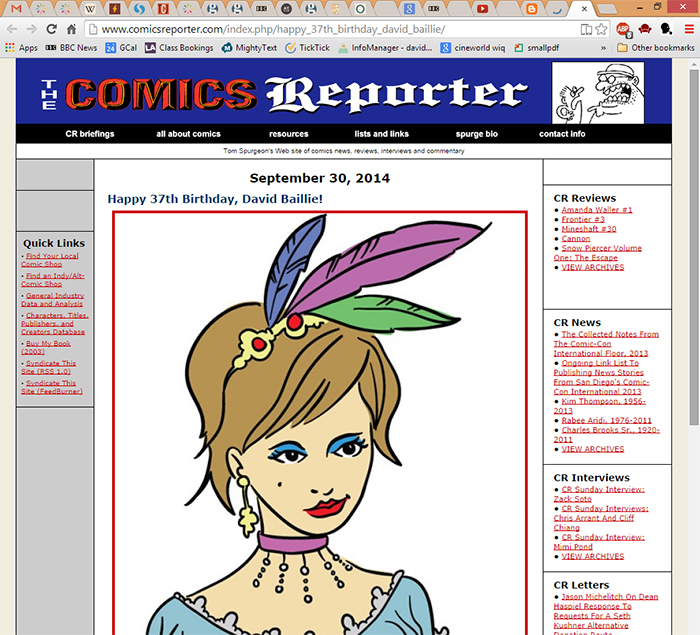 So I thought now might be a good time to update the blog with all the stuff that I really should have updated it with throughout the year.

Don't worry, I won't do it all in one go. For one thing I have to pack for New York ComiCon and, if previous packing projects are anything to go by it's going to take nine times as long as I think it will...


Speaking of Comic conventions and festivals - if you're currently in The Lakes / Kendal area make sure and check out the Windows Art Trail they're hosting up there. My mate Sean Azzopardi has done a fab original piece in a cool bakery and I drew this for a local estate agents:

(Photo courtesy of that project's co-ordinator, the marvellous Sandra Woods.)


Other comicsy things I've done recently include a bit of talking in front of people.


Thanks to the fab Maura McHugh I attended my first World Con last month.

I've wanted to go to an annual World Science Fiction Convention since I was a teenager, when, while reading the first ever Nebula Awards Anthology I decided I wanted to be a science fiction author. Of course the book was thirty years old and what I really wanted to be was a 60s science fiction author. (A revelation that led to me wasting more than a few good writing years trying to invent a time machine. A story for another blog post.)

Maura even managed to smuggle me onto a couple of panels. I ended up babbling for quite some time on the subjects of networking in comics, and which 21st century comics might be remembered in 50 years time. (And if you're gutted you missed it, a good summary of that second panel is up at tor.com!)


The second talking thing I did was back in July when I took part in a keynote roundtable chat at the International Comics and Graphic Novels Conference, organised by the world's biggest Misty fan - Ms. Julia Round. It was great fun, even if I did feel massively outclassed by the two Mikes, Carey and Perkins - both of whom were as gentlemanly, entertaining and informative as their successful comics careers would suggest they are.

It was great fun and also an absolute honour to be talking at such a well-respected academic conference dedicated to my medium, taking place at The British Library. 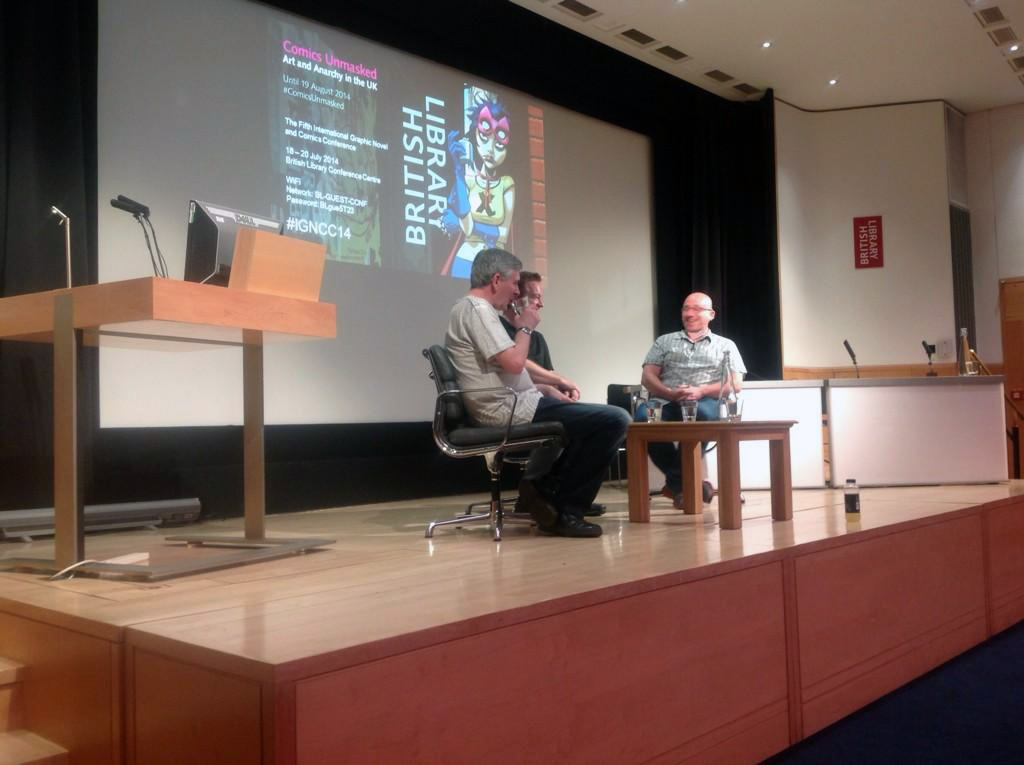 (photo courtesy of Julia Round)

Anyway - that's probably enough from me. What have you been up to?

Hm. Oh, really? Well I hope they manage to sew that back on.


If you're at New York next week I might see you there, although I don't think I'm doing any panels. (I was supposed to be announcing a new project there, but it was going to require an insane rush for the team to have it ready for the con so instead I'm going to be a man of leisure***.)

If I can queue up another blog post next week you might see me here again, otherwise I'll be babbling on Twitter about my time in the large Malus domestica.

* It wasn't actually that many. I'm not going to check. But I'm pretty sure it wasn't that many.

** It didn't really. I might live in a bit of a bubble, but I honestly know when my birthday is. Usually. Also - it totally fills my heart with joy when Tom Spurgeon at The (awesome) Comics Report wishes me a happy birthday. Or at least it takes the edge off my increasingly impending doom.

*** This is code for: If you do see me in New York I'll probably be in a pub.
at March 03, 2016
Email ThisBlogThis!Share to TwitterShare to FacebookShare to Pinterest