For the record - if I’m not updating my journal it probably means I’m busy rather than pushing up daisies.

Let’s see… What have I been up to since last I typed some nonsense here? View from the Empire State Building
Oh yeah, I went to the New York Comicon at the end of February.
The convention was great if you actually managed to get in and not so great if you were one of the unlucky thousands standing in line outside in the freezing cold.
I got to catch up with some old faces and meet some new ones and the cold hardly deterred us at all. I’ll definitely try and make it over next year. 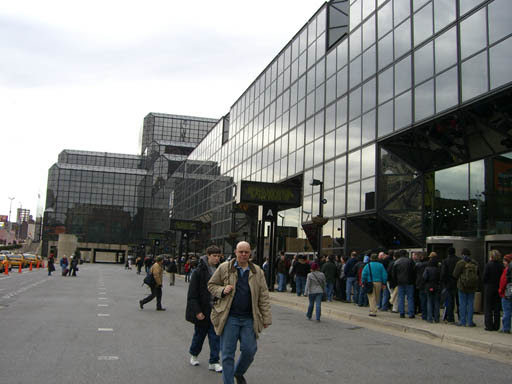 The line before it got crazy
I was really disappointed that I didn’t get a chance to catch up with anyone outside of comics in New York. There are some folks in Manhattan I haven’t seen for a long time, and others I saw not so long ago, but I know for a fact they know where the real action is, so I might have to go back and do all the social bits later in the year. 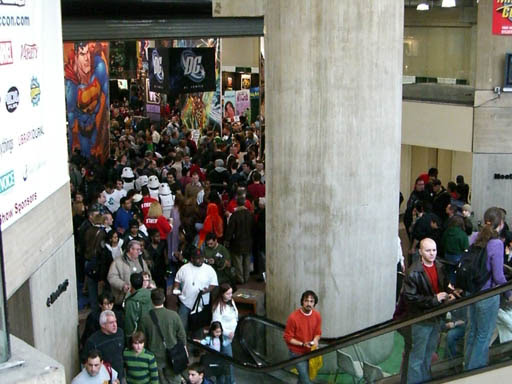 No time for touristy type stuff either, unfortunately. I stayed at the Ramada, which was only a block away from the convention centre, so I barely saw any of New York, other than that four minute walk back-and-forth, until the day I left.

My swag bag was heavy upon my return – I picked up the lovely new edition of Black Hole, Absolute Watchmen (for 20 quid! Thanks Jim Hanley!) and the lovely Acme Novelty Datebook. Free stuff included a snazzy roadster Batmobile (see I told you I was a geek!) from a very nice man at Corgi and the new Ultimate Avengers DVD from the generous people at Lions Gate Films.

The last night was pretty cool, and gave everyone a chance to unwind.
And here's the proof: 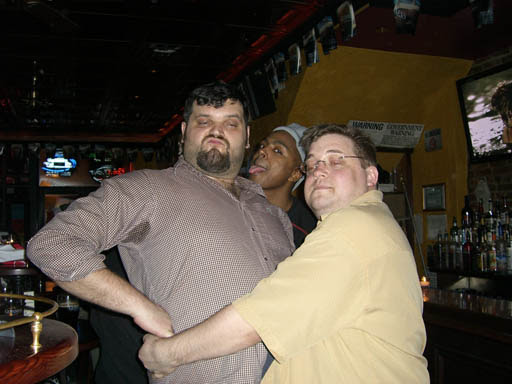 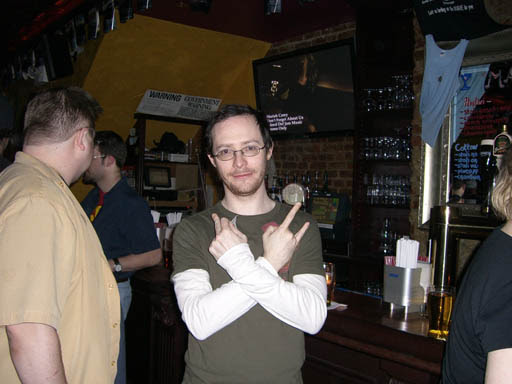 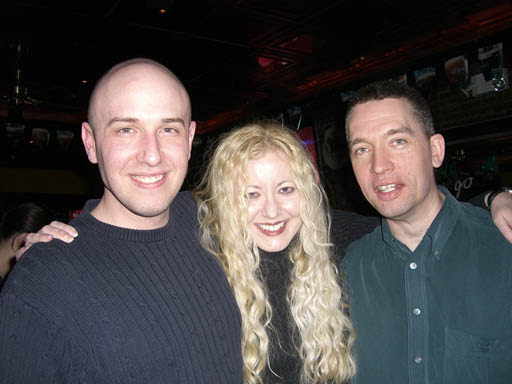 Matt and Jade from Cellar Door with Jim Alexander 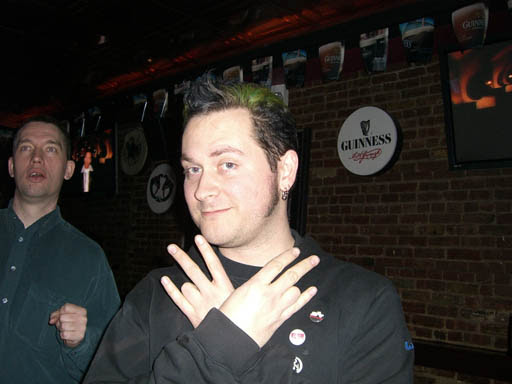 Devils Due's Josh Blaylock
As soon as I got back from New York, New York, I immediately had return to the grindstone in order to get some top secret projects ready for the UkWebAndMiniComixThing. A week of drawing, printing and chopping cannot also be a week of e-mailing and blogging, as a wise man once (surely) said.

Of course by now many of you will know what I was working on – my two new A6 books Mindy/Pool and the Sketchbook. If you haven’t seen these yet, and you want to, then drop me an e-mail using the link at the top of the page.

During the chopping phase of my publishing schedule I had a bit of a mishap and instead of trimming a comic I also ended up trimming my finger. I didn’t want to talk about it until I was sure the bit I chopped off was going to grow back. It’s looking reasonably healthy now, but still quite tender. The bag of edge trimmings on my floor still has a chunk of my index finger in it. 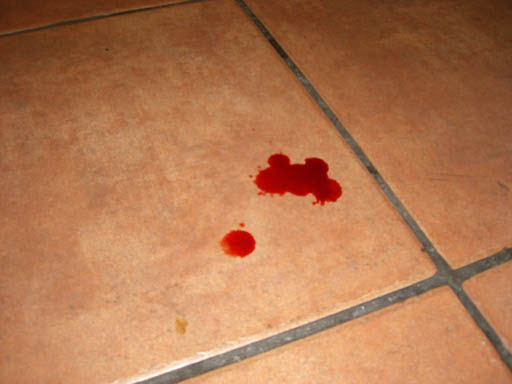 The UkWebAndMiniComixThing was, as always, a right laugh. I’m not sure it was as busy as last year, but trade was brisk enough to do a little better than breaking even (although I didn’t have a hotel bill to pay so that wasn’t that tough) and it’s always cool to see the small press gang out and about rather than hunched over a drawing / dining table, working on their next masterpiece.

I did my very first panel – with Andrews Luke and Winter, Matt Badham and the ever-glamorous Leon Hewitt. I had a microphone and everything! I enjoyed it so much I’m going to try and get on all sorts of panels from now on. 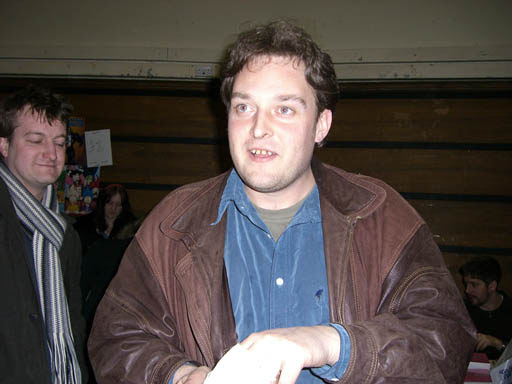 THE Andy Luke
Of course we all went to the pub afterwards. 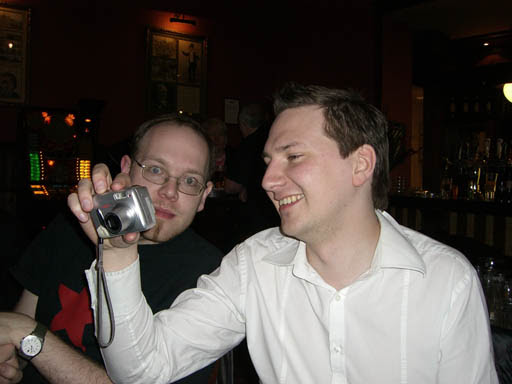 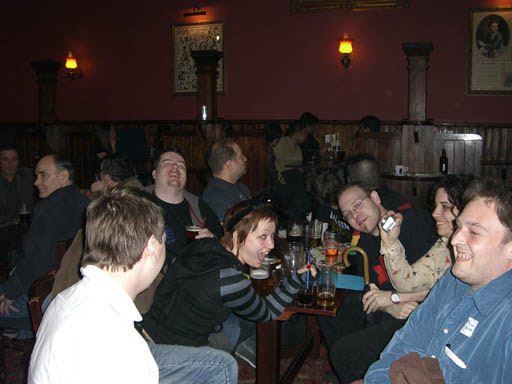 Many photographs were taken.

In fact this may be the most photographed convention I’ve ever been to.

Back to mine afterwards where we indulged in some whiskey tasting and Transformers the Movie (which provided Shane Chebsey an opportunity to prove that he knows the script by heart!) 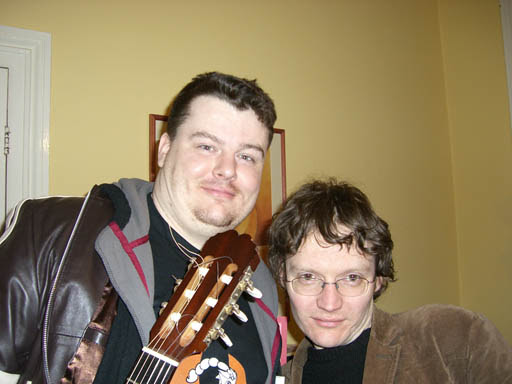 The Engine boys Baz and Leon play an impromptu gig in Mile End
People started to fall asleep at around 4am and there was an exodus to the local taxi shop then myself and Douglas finished the evening with some Jam.

Today I decided to relax after a few weeks of being really busy, so I took a gentle stroll along the South Bank. The book market wasn’t there today for some reason but the Tate Modern was. 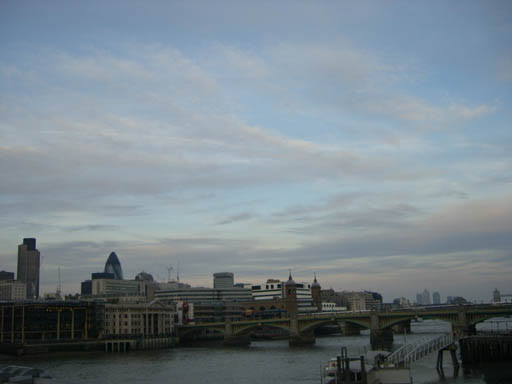 Some really great stuff in there at the moment but I can’t recommend Ishi’s Light enough. It’s a walk in sculpture that envelopes the viewer (one at a time mind!) and leaves him or her completely disorientated. If you submit to the illusion for the time you’re in there, it is very difficult to hold onto the real world. 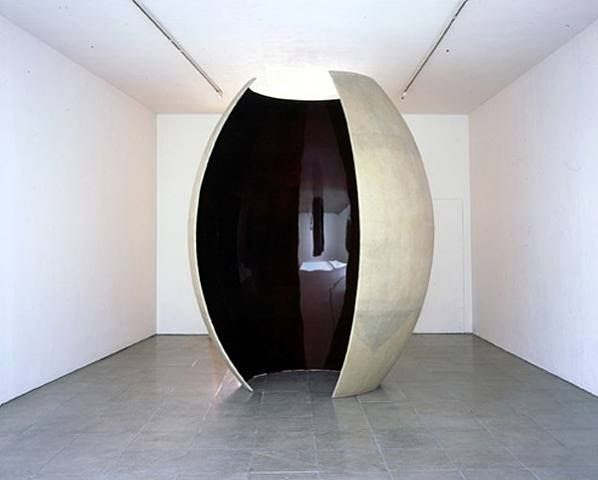 Ishi's Light
I’m not sure how they arrive at a price tag of a half million though.

There was a sculpture of sorts, consisting of lots of white boxes, in the turbine hall, which was also pretty cool. I can’t remember who the artist was, but if you’re reading this then you already have the Internet and I don’t need to spoon-feed you, do I? 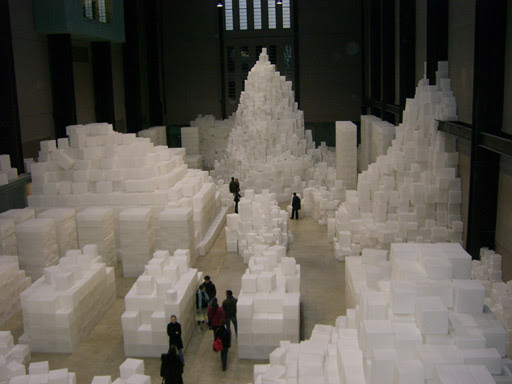 Matthew Modine was in the bookshop, which probably means he’s doing a play in the West End. I doubt he’ll be there when you go, but I thought it was worth mentioning anyway.

I’m going to make a start on the mountain of email I have in my inbox now, and then get back to work.

Speak to you again next week.
at March 13, 2006
Email ThisBlogThis!Share to TwitterShare to FacebookShare to Pinterest