My head is bursting right now. So much going on, my brain is starting to divide itself up to deal with all the different jobs.

Here are a few things that have distracted me recently: 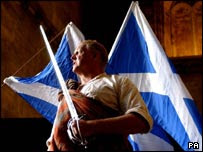 The 700th anniversary of the death of William Wallace has been marked with a memorial service in the House of Commons.

"It is important for Scots everywhere to remember his sacrifice and ensure that Scotland remains a nation."

In Edinburgh, a group calling itself the "Irrepressible Wing of Scotland's Frank Zapatistas" marked the day by putting up new street signs on Princes Street and the Royal Mile.
The former was called "William Wallace Street" and the latter "The Wallace Mile".

I’m a big fan of The Media Hacklab and IndyMedia UK.

From the latter site:
My favourite photo of the year so far, from the G8 Summit protests... 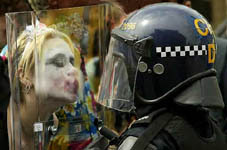 And one of the most disturbing 'police state' stories of the year:

The annual Czech 'CzechTek' (also known as Technival) is one of the biggest free festivals in Europe. With over 6000 people attending this year, it has met with severe police hostility. Police blocked access to the legally rented festival site and later attacked it, resulting in over 50 injured people. One man has been confirmed dead. Police has stated he was killed in a "normal car accident". The Czech League of Human Rights have called upon Interior Minister František Bublan to immediately resign. A large demonstration against the police brutality, in Prague on Sunday July 31th was attended by over 5000 people and was supported by the former Czech President Vaclav Havel. The demonstration in the capital ended in a streetrave. Solidarity actions have been taking place throughout Europe.

And, no I won’t be mentioning the Piano Man fiasco, although I think the terrible reporting of the facts of the case is a remarkable indictment of our over-eager-to-impress national media.
at August 24, 2005
Email ThisBlogThis!Share to TwitterShare to FacebookShare to Pinterest