This week 2000AD Prog 1827 lands in newsagents and comics shops all over the world. Among the riches on offer (such as brilliant episodes of Judge Dredd, Dandridge, Stickleback and Zombo) is the first part of a story called The Ghostship Mathematica which features incredible art by the brilliant Inaki Miranda and a story written by me. 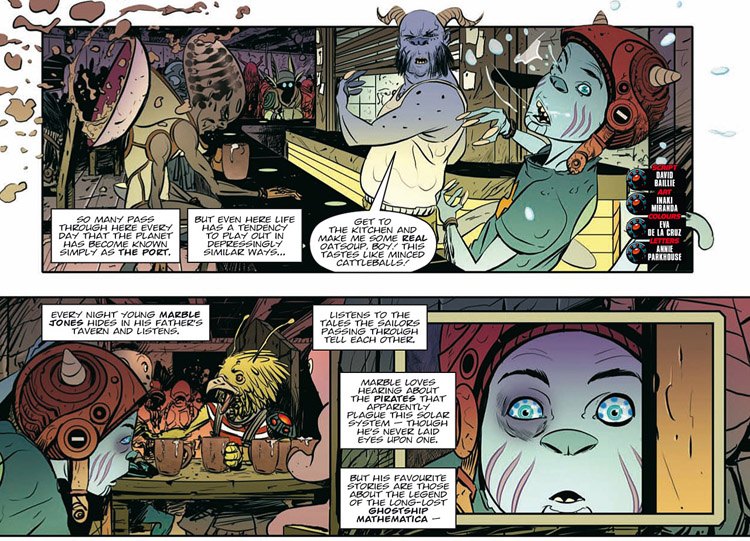 Anyway, the Mighty Tharg himself his given me permission to post some scripts on here and I thought I'd begin with this one.

The original pitch document was three pages long (a page for each episode) - here is page one:
The Ghostship Mathematica - one page pitch

Right - the following paragraph details the technical process of how I ended up with the final script. I'm including it because people ask me quite a lot about the nuts and bolts of things like formatting, and this gives me somewhere I can point them. If this isn't your cup of tea, please gleefully skip right to the end, where there's a link to the PDF of the full script.

Okay - the process bit... For a 2000AD story, I usually go from the one-page pitch to a transitional document in which I've broken down action and images into bullet points. Each bullet point is a panel but I'll also include important snippets of dialogue or captions. Most of the time I know where the page breaks are quite early on, but if not then it becomes clear at this point. I also look to see if I can juggle panels at this stage to make the story flow better. I used to use Microsoft Word to format this document into a more pleasing-to-the-eye script, using a set of Macros I'd written for the job. (I had a confusingly large collection of these macros and occasionally a comic would temporarily dress up in BBC Radio script format because I'd pressed the wrong button. This was doubly frustrating as the BBC Radio play I'd written those macros for was never produced.) When I switched to using the (brilliant) open source suite Open Office I couldn't be bothered re-writing the macros. By then I'd done a bit of TV work and invested in script formatting software called Final Draft. So instead of macros I used a Windows program called Auto Hotkey (which is really useful for a ton of stuff) to write a routine which copies the panel bulletpoints from Open Office and pastes them into the script program as their correct elements (character name, dialogue, etc.)

Which might sound needlessly complicated, but actually saves me a huge amount of time messing about with tabs, caps and all that.

Anyway - here is the script:
The Ghostship Mathematica Episode 1


I'm absolutely delighted with how the comic came out. When you read the script you'll appreciate just how inventive Inaki and Eva have been, especially when it comes to the crazy collection of aliens in the bar! I haven't seen the art for episode two yet. I honestly can't wait!
at April 11, 2013
Email ThisBlogThis!Share to TwitterShare to FacebookShare to Pinterest

Hi David,
Thanks for posting this. I've been working on my first Future Shock submission and your advice about using bullet points to write panel actions/snippets of dialogue has definitely helped me form the basis of the script.
Thanks,
Jamie