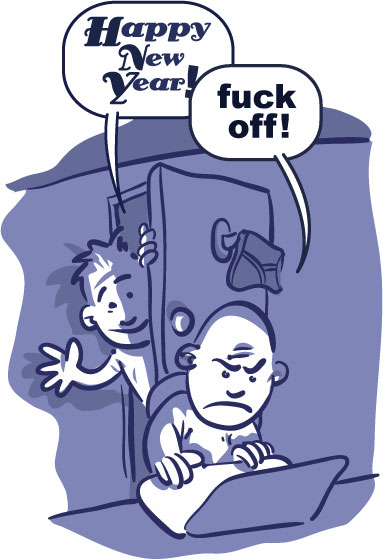 Well I haven't done this for while.

I kind of took a break from the whole online thing last year (Twitter, Facebook, blogging) mainly because I was feeling sorry for myself and I didn't want to turn into one of those people who use the internet as their personal whinging machine. Once in a while is fine, I suppose, but any more than two 'Oh God - poor me!' status updates and you can bet that 'friends' will start either blocking you or ignoring you. Which is exactly as it should be!

(I should probably point out that I haven't actually cheered up any, but I realise that if you don't appear online at least once a week these days people think you've died. And as much as it'd be nice to have some flowers in the house, I'd rather not find out just yet if I'd merit an obit on a comics website.)

(Although it was awesome to have my birthday noted on The Comics Report blog last year, an ambition of mine for the last few years!)

So 2010, eh? Can't believe we all made it. Apart from impending bankruptcy, my face wrinkling so quickly you'd think I'd been lying in a bath for a month and me still not experiencing anything that feels vaguely like success, I can't complain. It's always going to be a mixed bag, eh?

On the plus side I've lost a bit of weight and can now see my genitals without the aid of a mirror.

I'm currently on my way to Paris to see the grand opening of The Casita Variations, an art project that I worked on last year. And, despite the apocalyptic weather, the train has now left the station.

That's not a metaphor. I mean the train has actually left the station.

So my only new year's resolution is to be less fucking miserable. I turned 32 last year, not 102! If you see me in the back of a pub, raging about something completely inconsequential, please remind me of this.

I just wish the French guy in the seat next to me would stop farting. I'd move but the train is absolutely packed and the only other available seat has a flush. I'll be mainly holding my breath and admiring the blizzard outside for the next couple of hours then...

Oh - and here is my 'Roundup of the Year' type thing at the (absolutely awesome, even though they let me in) Forbidden Planet Blog.

(If you click through the blog you'll find far more enlightened opinions on what was the best stuff of 2009 from people you might actually have heard of!)
at January 09, 2010
Email ThisBlogThis!Share to TwitterShare to FacebookShare to Pinterest