Tell you how badly my brain is functioning at the moment. I just saw a headline on BBC World News that read 'Local Girl Wins Miss World 2007', and I thought...
Wow...
A Mile End lass?

Might have been overdoing it these last couple of months, either that or I'm gettin' old. Who can say? Not quite at the brain-pop stage yet, though so don't worry.

First off - Matt Badham has a new blog. It's called Things You Should Do Instead Of Reading Blogs. It's an easy to remember URL for those of us who learned the four points of the compass using a warning about shredded wheat when we were youngsters. Just remember kids - Tisor's bad for you.

Actually that doesn't work at all.

Anyway Matty is kind enough to pimp both my web comic - The Belly Button Chronicles (he didn't know at the time that he actually starred in this week's episode!) and the Camden Stall I'm manning with Oli 'I'm 21 this week' Smith.


I have a mate called Steven Gordon. This is an interview with another Steve Gordon entirely - one who has worked on some really interesting animated properties. His X-Men designs for the Evolution cartoon really rock.

And I think this might be my new favourite sport. In fact I'm thinking of starting the first Boxing Chess club in the country. Who wants to join? 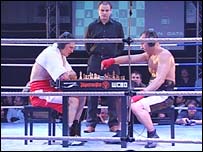 The new Miss World is from China apparently.
So there you go.
at December 01, 2007
Email ThisBlogThis!Share to TwitterShare to FacebookShare to Pinterest

yo dave i just read all 13 episodes of your "turning 30" strip - excellent stuff mate. must come up and see you one day at Camden Lock.
hope your ear is better. let's sit in the park when the spring comes - and meet indoors before then - kebabish? ;-)
vivster