I find it hard to pass a second hand book shop without popping in. I've always been that way. I must have some sort of second-hand-book-shop-horseshoe on my person too as I often find something that I'm genuinely looking for.

For example the follow up to M. John Harrison's brilliant novel Light, Nova Swing, has been on my to-get list for a few weeks and I spotted a signed copy of it the other day for 3 quid. (Then Clerks 2 was there for a couple of quid too. Of course Clerks 2 isn't a book, but still...)

M. John has a great post at his Blog, Uncle Zip's Window, about how he writes.


I am tired today and long sentences are beyond me.
Which is a shame as it's a writing day for me.


I have recently developed a Paul Newman fascination. Somebody Up There Loves Me, The Sting, The Hustler... It's true - they really don't make 'em like they used to.


A really cool new sketch blog by John Kirkham/Phuz, which you should check out.


Miranda July has a new book, called No One Belongs Here More Than You. As you would expect, the website for it is really cool. And her own site seems to have developed a password based entry system...

A list of Hitchcock's film techniques - most apply equally well to comics. If I were more awake I'd probably print it out and stick it somewhere.

If I were more awake I'd probably be writing a comic rather than a blog post.

We want to know - who is the mystery man leaving 10,000 yen parcels in toilets?

People in Japan are puzzling over who has been leaving envelopes with 10,000 yen ($82; £40) notes in men's toilets across the country. The mystery has gripped the nation, with much media speculation about the identity of the unknown benefactor.

Handwriting experts say the letters are all written by the same person, whose shaky handwriting suggests somebody elderly or seriously ill. They also note that the writing has worsened over the months since the first set of bills was found.

The fact that the letters end with the phrase 'please be happy' points to somebody who's unhappy themselves - who's perhaps facing up to their death and wants to give something back to the world," the Asahi Shimbun quoted one expert as saying.

London prepares to swap one idiot for another.


A couple of BBC links I meant to post ages ago:
The man who invented the cash machine. 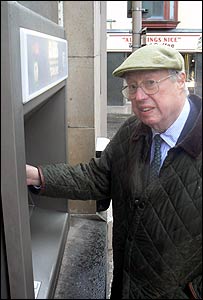 And a really interesting article by the outgoing Tehran BBC correspondent, Frances Harrison.
at July 20, 2007
Email ThisBlogThis!Share to TwitterShare to FacebookShare to Pinterest