I'm sitting at my desk in a suit and shiny shoes, which is unusual for any day of the week never mind a Saturday. My friends Zoe and Tom get married later today and to maximise 'work time' I got ready well in advance and I'm regularly checking to see how the Central Line is doing. (It's been appalling all week due to a variety of reasons, which suspiciously have all resulted in very similar disruptions).

I was hoping to pop into the launch party for Best New Manga (at least I think that's what it is) at the Cartoon Museum, but if I do it will be for about seven minutes.
Maybe eight.

Here are some things...

Easily receive WIFI signals from far away using a standard USB WIFI adaptor and a bit of ingenuity. This Simple idea requires no modifications to a USB WIFI adaptor or your computer. A simple way to increase the signal strength and range of your WIFI. Plus it works with all USB WIFI adaptors

Has everyone been reading Instructables except me?


New Scientist ask the cleverest people in the world what the place will be like in 50 years time...

In 2056, I think you'll be able to buy a T-shirt on which are printed equations describing the unified physical laws of our universe. All the laws we have discovered so far will be derivable from these equations.

We will have confirmed beyond doubt, through observation, that what we now call the big bang wasn't the beginning of everything, merely the time when our part of space stopped undergoing an explosive stretching called inflation. We will have understood the physics of inflation well enough to know that inflation continues forever in some faraway places, and that in other places where it has ended and allowed life to evolve, the T-shirts on sale mostly have different equations. 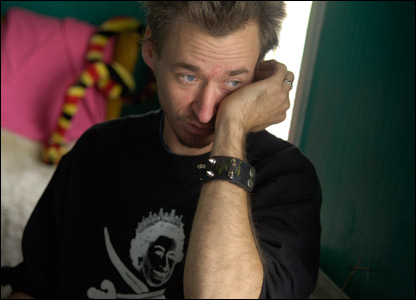 Jan, 33, does not have a permanent base, but chooses to squat in empty premises. Up to 12 people can live in the squat, which is made up of several derelict council flats.

"They are people who do things that don’t make the money that enables them to pay the rent, or who are living a life that is pretty international."

The BBC continues its series on alternative lifestyles and housing in the UK.


And from this week's Ten Things We Didn't Know This Time Last Week:

7. About 60% of drivers stopped by police do not give their true identity.

at November 25, 2006
Email ThisBlogThis!Share to TwitterShare to FacebookShare to Pinterest