Okay – competition time...
I am dismayed to say that no one got the correct answer. Yes, that was the top of my head on a picture from Sunday at the ICA... 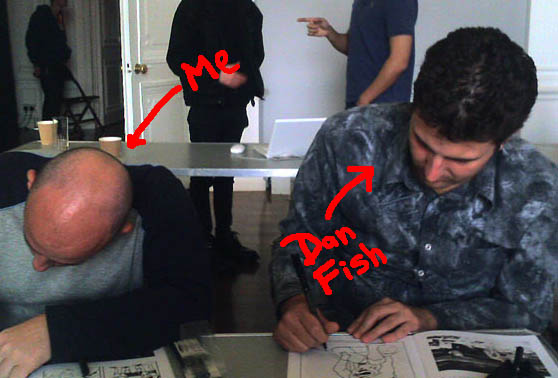 But I was also in the photo of the audience for the Lost Girls talk!

Sorry.
I've now eaten the prize.
It was yummy.
Try harder next time.

A Guardian article I was reading in the pub:

Time was when cars were red, televisions were black and fridges, toasters and cookers were plain white. But not any more. Now everything is sleek, steely and shiny. What does our obsession with the 'colour of the future' say about us, wonders Paula Cocozza

Scott Adams (of Dilbert fame) has some good news:

As regular readers of my blog know, I lost my voice about 18 months ago. Permanently. It’s something exotic called Spasmodic Dysphonia. Essentially a part of the brain that controls speech just shuts down in some people, usually after you strain your voice during a bout with allergies (in my case) or some other sort of normal laryngitis. It happens to people in my age bracket.

A great cover to the Virginia Quarterly Review by house-husband comics-genius Chris Ware.

And an interview with him at the Capital Times:

A few years ago, I started to occasionally find myself unaccountably nostalgic for my periods of loneliness. This was on one hand quite silly, but I do believe that at those times, if not completely overcome by emotion and self-pity, one is able to clearly see the strangely reassuring meaninglessness of human activity, which is in itself a sort of reason to live. I guess I wanted to hint at that feeling in this one episode.

And at the BBC, Travelling with the Taliban: 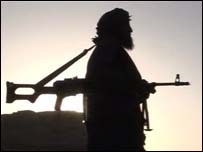 The BBC's David Loyn has had exclusive access to Taleban forces mobilised against the British army in Helmand Province in southern Afghanistan.
There is no army on earth as mobile as the Taleban.
Piled into the back of open Toyota trucks, their vehicle of choice, and carrying no possessions other than their weapons, they can move nimbly.

Can everyone see Joel’s picture of Alan Moore in the last post? If anyone is having trouble please give me a nudge.

On Monday I was fortunate enough to attend an advance screening of Chris Nolan’s new film The Prestige – starring Batman and Wolverine. It was really good – and afterwards I made a mental note to read the Christopher Priest novel it is based on. It’s out on the 11th of November in the UK. Go see it and then thank me afterwards.

I also went to a members/residents/other people showing of the In The Face of History exhibition at the Barbican, which was really, really cool. Well worth the 8 quid entrance fee I didn’t pay.

I also got to walk around the huge Barbican green house that I didn’t know existed.

Back to work now.
at October 25, 2006
Email ThisBlogThis!Share to TwitterShare to FacebookShare to Pinterest

Darn, missed the competition! I'm sure I could have worked out the answer, too.

I'll give you a heads up for the next one, mate. I'm thinking of making 'Where's Dave?' a regular feature.