I saw Cars yesterday morning, while you were all at work, and it was great. If you’re a cinema critic and you gave it a bad review in whatever rag it is your purpose in life to provide content for, and if you had anything but kind things to say about said film, I have a few words for you:
Go buy a clue my friend! I understood it had received a somewhat lukewarm reception and so I wasn’t sure what to expect. Imagine my surprise when it turned out to be fantastic. I’m guessing that these so-called-journalists were simply uncomfortable having an emotional response to a story acted out by computer-generated characters. That or they went to see a different film.

For anyone who has invested in said anthology you may have noticed that a slight printing error makes my contribution a little difficult to read, so I’m reprinting the individual cartoons here for your delectation. Here is part one… 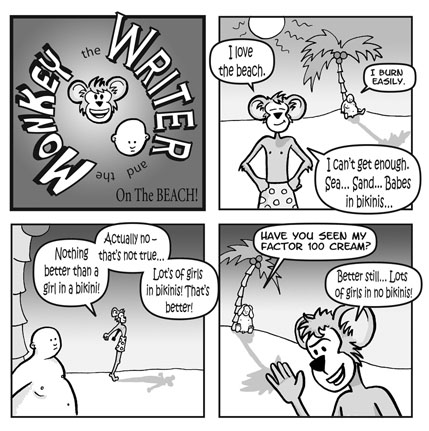 And now, back to work.
at August 17, 2006
Email ThisBlogThis!Share to TwitterShare to FacebookShare to Pinterest