Nothing to be done. 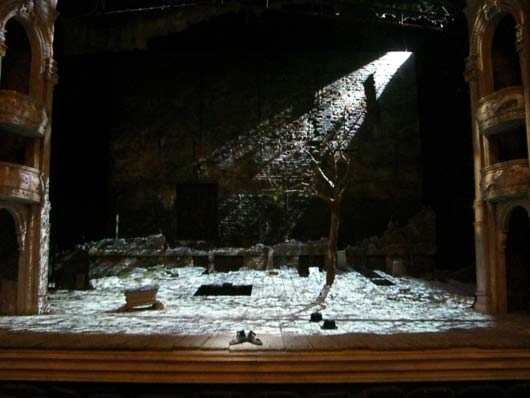 Just got back from seeing Waiting For Godot at the Barbican starring Johnny Murphy and Barry McGovern (part of the Beckett Centenary celebrations). I hadn’t seen it before and it was so good I’d gladly sit through it a second time tonight, given the chance.
Although I can understand why it’s not everyone’s cup of tea. (Incidentally, if you didn't get Godot, then steer well clear of his shorter, later plays like Rockaby and Ohio Impromptu, which we saw last week in the Barbican dungeons).

Tom Spurgeon at the Comics Reporter declares it is Simon Bisley’s 44th birthday today. I’ve drunk in proximity to this man a few times at conventions (as most UK comics people probably have) and I’d always thought he was only a couple of years older than me. Of course, now I come to think of it, I do remember gasping at his ABC Warriors art while I was still at school.

I think I’ll end with another quote from Godot...

We're all born mad.
Some remain so.

Night night.
at April 04, 2006
Email ThisBlogThis!Share to TwitterShare to FacebookShare to Pinterest