It's so nice to be able to write outside again. The sun is shining bright and it’s almost warm. As I write this I'm sitting outside the British Library eating a duck and hoi sin sauce wrap.

I'm making an impromptu journey north for a meet up with the Redeye guys and, since I’m passing by on my way to Euston, I thought I'd pop in and see what all the fuss was about at the British Library, after hearing many great things. 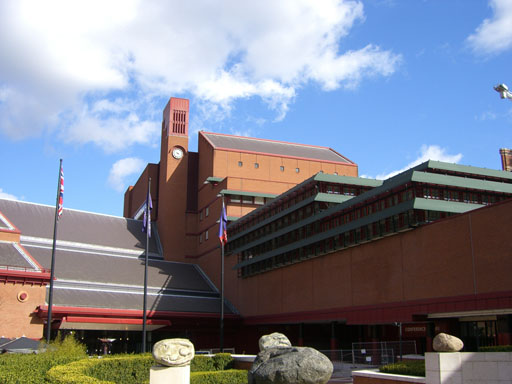 The British Library
I must say – I’ve not been duped! I've just spent an hour wandering around the John Ritblat Gallery amazed at what is on display. I saw the original manuscripts for Benjamin Britten's War Requiem, Mahler's Urlicht, Elgar's Enigma and a version of Beethoven's Ninth Symphony, mostly written by his least favourite copyist (I feel sorry for the poor guy if that is his only lasting legacy) and so almost every page bears a correction or note from the composer. Beethoven's tuning fork was also there as was the libretto used for the very first performance of Handel's Messiah. There was an original manuscript of Mozart’s, reunited hundreds of years after his wife had cut it in two, hoping to get more money for it that way (this was after his death and before anyone had thought of composer’s royalties). Also interesting to see was a copy of Petrucci's first printed music book from 1951.

There was James Joyce's scrawled first draft of Finnegan's Wake, Kipling's Tale of a Mongoose (Riki Tiki Tavi!) and the original handwritten version of Alice in Wonderland (Alice's Adventures in the Underground), containing illustrations by Charles Dodgson (Lewis Carol to you and me). There was a bundle of first printing copies of David Copperfield, Jane Austen's writing desk, manuscripts and glasses and Chaucer's Canterbury tales. The only surviving medieval manuscript of Beowulf. Shakespeare's First Folio, and his mortgage contract. And to top it all off the original handwritten lyrics for the Beatles tunes Yesterday, Ticket to Ride and I Wanna Hold Your Hand. All in one room!
I feel like a fool for not having visited before.

They also have copies of many of their rarest books stored digitally which you can flick through on a touch screen monitor (although trying to turn the pages by 'grabbing' the corner and dragging it across the screen was a tad tricky and most people seemed to give up and use the clicky arrows instead.)

If you go make sure you also take a look at Paradoxymoron, which is hung on a wall down on the Lower Ground Floor (where the lockers and education room are). It is really, really cool. I stood and gawped at it for a bit along with about a dozen kids (it's the half term holidays isn't it?) 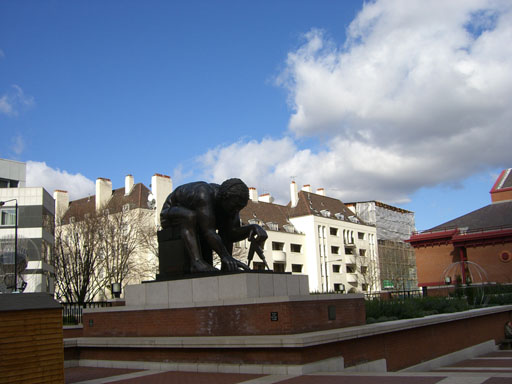 'Newton' (after Blake) by Paolozzi
The duck wrap was lovely too.
Now really... Does anyone know where my sunglasses are?
at April 08, 2006
Email ThisBlogThis!Share to TwitterShare to FacebookShare to Pinterest