Well at least now I know when my deadline for leaving the country is.
2010.

I hate writing this, but I finally saw Match Point last night and it was a real disappointment. I even had to apologise to Jen for buying her a ticket. The critics who called this a ‘return to form’ should have their journalist badges torn up and eaten by a pangolin.

What was Woody thinking? I wondered as I munched my way through a recovery MSG laden meal in Chinatown minutes after it had finished. I reckon he fell in love with some fictional London, which he assembled in his imagination from the weird selection of locals he must have met while writing it (or did he perhaps write it while in the US, taking cues from the hundreds of terrible English films he’d seen?). Then he tried to fashion a story around a structure novelty which appealed to him (which I really liked, incidentally), but instead of using his usually tight, but meandering, dialogue style he somehow managed to write some of the worst script I have ever had to sit through.

I’m still a fan, but I’m going to warn off any friends who fancy catching this on DVD.
(To be fair – more than one person told me it was rubbish and to save my money, but my faith in Woody was, until last night, unshakable).

But enough about me – a man has been up a tree for 15 years. 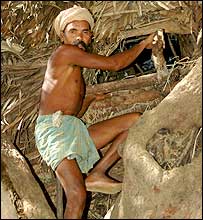 An Indian man has been living in a tree for the past 15 years despite passionate appeals by his mother to return home.

(I meant to mention this two months ago… Sheesh)

Hoax, military decoy or film prop? A householder from Norfolk doesn't know what to make of an "alien" that has crash landed into his attic. 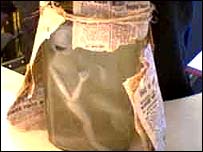 And from last year…

A list of advice from comics people you should listen to, the above being from very wise Mike Carey.

I’m fighting my way through the ever-present pile of work. Spare a thought for me and my plight when you read this tomorrow.
Or don’t, if that’s how you’re going to be…
at March 29, 2006
Email ThisBlogThis!Share to TwitterShare to FacebookShare to Pinterest