Saw Evil Aliens last night with Ade Brown. As the man himself put it:

If that’s not a hearty recommendation then I don’t know what is. I’m not sure I’d describe what happened in the first scene as ‘probing’, but I’d definitely recommend this splatter-gore-laugh fest to anyone… Well almost anyone. Well, okay – I’d be careful who I recommended it to. But it was great fun.

Men are digging a hole in the road outside my bedroom. I think I need to find somewhere else to work this week…

I’m going to a special screening of the Korean revenge flick Dalkomhan Insaeng / Bittersweet Life tonight with Liam in the West End. If I make it back in one piece I’ll try and remember to tell you what I thought of it.

And top stories in the news today: 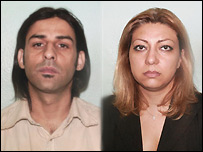 A dentist from south-east London who let her unqualified boyfriend treat patients has been struck off.

Mogjan Azari allowed her lover Omid Amidi-Mazaheri to work on more than 600 patients, leaving many in agony.

He drilled out cavities without local anaesthetic and installed expensive fillings that crumbled within days.

The pair charged the NHS for the bungled work and other non-existent procedures and are believed to have made £120,000 from the scam. 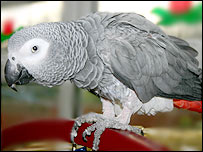 A parrot owner was alerted to his girlfriend's infidelity when his talkative pet let the cat out of the bag by squawking "I love you Gary".

Suzy Collins had been meeting ex-work colleague "Gary" for four months in the Leeds flat she shared with her partner Chris Taylor, according to reports.

The parrot also made smooching sounds whenever the name Gary was said on TV.
at January 17, 2006
Email ThisBlogThis!Share to TwitterShare to FacebookShare to Pinterest