Speaking of 2000AD...
I was reminded a couple of weeks ago that 2000AD fans are a breed apart and probably the friendliest, coolest and most handsome people in the world.
It was barely a minutes past 10am and I'd just shown up at the recent London Comic-Con KAPOW! to set up my table and display my wares. This is something I hadn't done for a few years and for a few moments I honestly couldn't remember why I ever did. Creating comics is very different to selling them and while I'm not usually shy, neither am I a natural salesman. Anyway - I texted my co-exhibitor Dan Lester and asked him to bring wine as this was going to be a long day. He replied and said he was still bed. It was now four minutes past ten and already things were looking bad.
And then something wonderful happened. A troupe of 2000AD fans showed up, said hello, asked for sketches and bought my stuff. Suddenly the world seemed like a brighter place and I was lifted out of my, frankly inexcusable, pit of self-pity.
Then Dan showed up with Chinese lychee wine and it got even better.
KAPOW! itself was brilliant. It was constantly busy, but the organisers kept the crazy queues for signatures and screenings well away from the main floor. The crowd consisted of fans young and old, male and female and there was a heartening number of families wandering around taking it all in.
A select few (about 60) of us even made it into the Guinness Book of World Records - twice!
(Quick aside - if anyone has a scan of any of the thousands of sketches I did on the day, drop me a line at webhello at davidbaillie dot net and I'll put them on the blog. I remember being quite proud of the Mean Machine and Strontium Dog ones...) 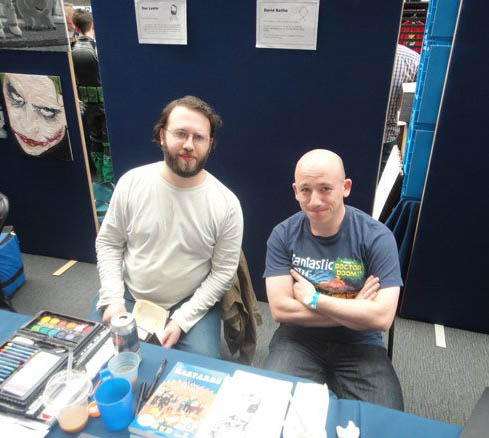 Photo of me and The Lester taken at KAPOW!
by and (c) Ms. Isla Rae Shortland.
(Also hello to Kev if you're reading this!)
KAPOW! came in for a bit of stick on the Internet, mainly because the pre-publicity and guestlist were quite superhero-centric (and so mostly male) but that wasn't at all reflected in the attendance on the day.
I think some of this was simply down to the figurehead for the convention, Mark Millar (if you don't know his name you'll definitely have heard of the films based on his comics - Kick-Ass and Wanted) raising some hackles with his enthusiastic self-promotion. This brand of hucksterism has a long tradition in comics, stretching back to the legendary Stan Lee himself - but does upset other creators who believe humility to be a virtue.
I don't know Mark but I did once spend an evening with him. (This isn't is kiss-and-tell, I promise!) It was at a meeting of the now-infamous SCCAM club in Glasgow in, I think, 1996. I was still at university and Mark was writing various strips for 2000AD and Aztek for DC with his then-writing partner Grant Morrison.
I wasn't yet twenty and a wee bit starstruck at suddenly being surrounded by names I knew from my own comic collection. (This despite a sternly painted notice above the stairs descending to the SCCAM basement bar announcing 'No fanboys!') Knowing no one, I stumbled up to the bar and counted out the change in my pocket to see if I could afford a pint. Mark, who happened to be standing next to me at the time, saw this and offered to buy me a drink. I declined, but spotting that I was both skint and a newbie, he got me one anyway. Then he took me under his wing, introduced me to other creators and sat with me for a few hours sharing anecdotes and advice about breaking into comics.
Now before I tell you what happened next I have to show you something. This is a scan from the inside cover of 2000AD Prog 849. 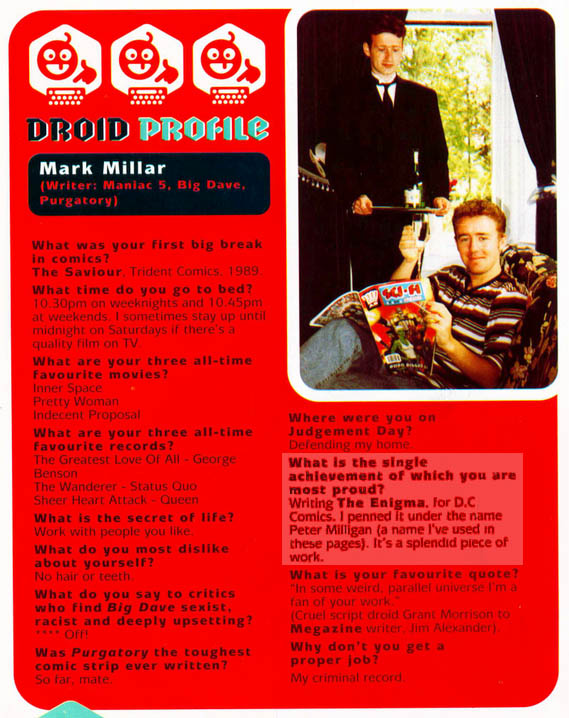 Now, if you look at that bit I've highlighted, you can see that Mark suggests that Peter Milligan is merely a pseudonym he uses. I didn't know at the time that he was joking. And Peter Milligan (who is a real person and not in any way a penname for Mark Millar) just happened to have written my favourite comic of all time - Hewligan's Haircut. As I sat down to drink the beer he'd bought me, I started gushing about Hewligan's Haircut and how I couldn't believe that I'd met the writer. (No fanboys, remember.) Not once did he flinch or correct me, knowing how embarrassed I'd be.

Whenever he talked about things he was working on (he was writing the Superman story Red Son at the time) I would say 'But is it going to be as good as Hewligan's Haircut?' When he asked what sort of comics I wanted to one day create I said, 'Something that makes people feel the way I do when I read Hewligan's Haircut.'

And when the evening was over, he wished me luck. And I thanked him again for writing Hewligan's Haircut.

The moral of the story? Even if you don't like people who take every opportunity to talk themselves up... I reckon Mark Millar is definitely a nice guy.
I was reminded of this story when I saw the photo below, which was taken on that very night. It was scanned from the SCCAM newsletter scanned by artist supreme - and one of those names I knew from my comics collection - Alex Ronald. He talks about his own memories of the club on his blog.

That's me with the 'I'm a star!' thought balloon attached to my head. (Yes, I had hair - loads of it! So much I had to tie it back in a ponytail.) Just north east of me is Martin Connaghan (writer of the new Burke and Hare GN), beside me Lorna Miller, over her left shoulder Dave Gordon, in the middle of the front row is Tommy Sommerville who ran SCCAM, peeking over his left shoulder is Frank Quitely, next along is Grant Morrison and he's pointing at Mark Millar.
(You can maybe see why I told the story about how humble and generous he was with his time before I showed the photo.)
at June 09, 2011
Email ThisBlogThis!Share to TwitterShare to FacebookShare to Pinterest