In the last five weeks I've been in London, Paris and New York.
In the last fortnight I've seen both Steven Berkoff and Derek Jacobi on stage.
In the last few days interviews with me have sprung up on the internet and in print.
In the last few hours I've drunk two cups of coffee and eaten a bowl of cereal.
I hope to go for a swim tonight. I've talked about Paris already, but New York was also very cool. I was, of course, there scouting for work at the NY Comic Con. It was a pleasure to meet so many fine people, pimp my wares, and then relax afterwards with other UK comicy people also chasing the big dollar. I ate the 'finest tiramisu in Little Italy' and came home with blisters on my feet the size of CDs. 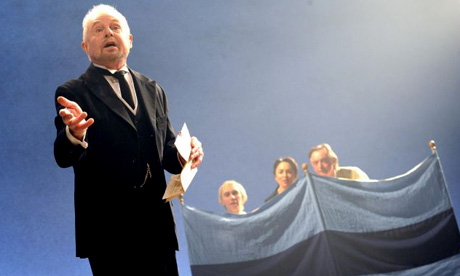 Twelfth Night and On The Waterfront were both fantastic. I think they're both close to sold out, but if you can find cheap tickets make sure you grab them.


RE: The interviews...
The episode of Alex Fitch's Panel Borders in which I blether for half an hour can be downloaded or streamed here.
And apparently a 'mini interview' with me appears in the latest (and last) issue of Comics Foundry. It's by Mad Matt Badham, and sometimes I wonder if anyone would have ever heard of me if it wasn't for him. Comics Foundry is an absolutely awesome magazine and it's a real shame that it's not-much-longer for this Earth.

The only two magazine that have really impressed me recently have been Comics Foundry and Wired (US, I haven't seen the UK relaunch yet) both of which I read cover to cover and thought afterwards that I got my money's worth.

And in other news...

Friend and fellow Scot Douglas Noble is starting a new story next week. He's one of the most interesting comics creators on the block, he writes a mean Jarvis and this is free. What more do you want? www.strip-for-me.com