Bloody hell - I just realised I didn't post anything on the blog for the whole of December. Not even a Happy Jingle Xmas message! No wonder people have been wondering if I'm okay.

Of course I haven't been. I'm currently recovering from the worst cold I've ever had. Well I say cold - the symptoms where oil-black vomit, delirium, biblical headaches, photophobia... Oh and I was coughing and sneezing. I wouldn't be all that surprised if someone told me it was the first stages of a new Black Plague.

After the first sleepless night of obsidian puke, I decided to consult Google, which fearlessly informed me that I had yellow fever. Of course that's a disease usually contracted from mosquitoes in tropical climes, and I'd just returned from Scotland in December, where it was too cold for aeroplanes to safely fly never mind plague-carrying insects. While surfing America's finest hypochondriac-baiting websites I discovered that the rest of my symptoms matched those of someone with early-stage meningitis. Fabulous! Cue me standing in a bath tub three hours later, the warm shower that had been promised as a cure-all elixir having no bloody effect whatsoever, as I inspect my aching, unresponsive body in a shaving mirror for suspect rashes.

All of this was contracted from my four and half year old nephew, who when he had it, barely complained between heaves and coughs. Am I getting old? Answers on a postcard...

I don't think it's any co-incidence that my second-worst-cold-ever was caught from my friend's eighteen month year old son last year. I thought it was funny that he was determined to stick his fingers in my mouth all the way through the picnic. I wasn't laughing twenty four hours later when his baby snot had transformed me into thirteen stone of whimpering man meat. 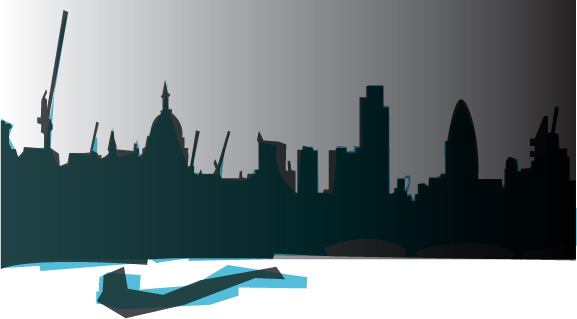 Today I can just about make it across the room to the laptop and see that I've missed any opportunity to send Xmas / New Year messages to anyone (oh well). I can also see that half the world has sent me an email. And I don't mean a collective one saying 'hello'. As usual, as if I need to repeat this here again, I'll get around to responding to almost everything in my inbox at some point in the next couple of weeks. Or years. Or something. Didn't any of you take time of for Christmas and all that?

I don't know if anyone reading this (is anyone reading this?) read the diary column thingies I used to write for Judge Dredd Megazine, but I seem to remember writing one about how only idiots make new years resolutions. Well here's one in the eye for my younger self.

(this Paul Newman picture and the London skyscape above were both sample illustrations for a project I'm working on in Paris with Dan Goodbrey. I'll get round to mentioning it here soon, probably. Oh wait - I just did.)