Right - first thing's first: Mark Thomas.
Jen and I went to see him last night in Kilburn, where he performed his two new shows: My Life in Serious Organised Crime and As Used on the Famous Nelson Mandela and had a fantastic evening.

I saw him play a warm up for his TV show years ago when I first moved to London and I've been an admirer ever since, catching his live shows whenever I can. (I even nodded to him last month on the South Bank when walking with Louis, my three year old nephew, before it dawned on me who he was. He returned my greeting with a knowing wink. What a guy!)

He's playing at the Kilburn Tricycle for the next two weeks. You should go.
Head on over to Mark's site and find out why 'If you're not pissed off, you're not paying attention.'
Then bring down capitalism by proxy with a McDemo.

Ahhh... The new Olympics logo. It's not that bad is it?
I've been doing quite a bit of logo work this year (although I've yet to charge 400,000 pounds for any of my efforts!) and I'm glad nothing I've created so far has generated so much ill-feeling.
Organisers defend it here.
BBC users offer alternatives here.
And professional designers offer their verdict here.


The Iraq Triptych at the Royal Academy's Summer Exhibition:


I saw Wal-Mart: The High Cost of Low Price last week and was suitably outraged.
Last time I shop at Asda!
I'll be mostly picking up veg at Queen's Market instead.


The BBC's Your Pictures had a Scottish flavour last week, so in a fit of nationalism I thought I'd link to it. 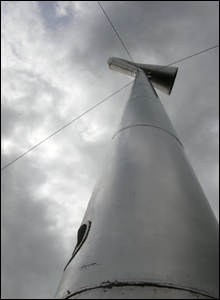 This 'Telly Tubby horn' is about 2
miles from where I used to live.

The incredible Al Davidson has a new blog, where he tells me he'll be posting dream sketches and giving art advice.


Thought for the day: Mindfulness.


For anyone that missed it my new monthly column started in Judge Dredd Megazine last month. Did anyone read it?

I'll finish with a drawing, since I haven't posted any art for a while...

A pig - do you want one?
That's about it for me this week.
Hope you're all well and enjoying the sunshine.
More soon.
at June 05, 2007
Email ThisBlogThis!Share to TwitterShare to FacebookShare to Pinterest