Something's rotten in the state of my kitchen. Can't quite track down where the smell is coming from, though so we're not sure what it is. No doubt the pong will increase until it's impossible to not find the source.

The only comics guy I regularly geek over, Chris Ware, is talking to P.O.V. about Tintin and cartooning in general. Well worth a read.

So who's going to the Bristol Comics Expo next week?

I'm writing something about robots at the moment, and so my eyes are peeled for stories like this one. Some great images there, too...

Scientists have expressed concern about the use of autonomous decision-making robots, particularly for military use. As they become more common, these machines could also have negative impacts on areas such as surveillance and elderly care, the roboticists warn. 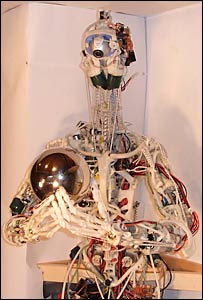 The world's biggest game studio has been created with the help of 20,000 volunteers. Thousands of people have signed up to help develop a community-built massively multiplayer online role playing game (MMO).

We also have a mouse or two in the kitchen. Inspired by reading about Jinty and her humane traps I decided to give building one a go.

This is what I found:

More news when I gather all the required equipment.

Talking about Chris Ware - someone has built some of the 'cut out and fold' toys that he prints in his books. And lovely they are too...

My friend Susie over at Studio QT tells us all what she does for a living in a really interesting post at her livejournal:

When I go out in public and people ask me, I say "Graphic artist". It's simpler and avoids having to go through the drill. It's almost like a drinking game...

Mike Baron writes an essay on Writing Comics that everyone is linking to, because it's good.

A father and son team from Edinburgh think they have found a secret piece of music hidden in carvings at a famous medieval chapel in Midlothian. Stuart Mitchell, 41 and his father Tommy, 75, said they had deciphered a musical code locked in the stones of Rosslyn Chapel for more than 500 years.

Scott Adams continues to be far more clever than he needs to be to impress me.

Suppose there was a hit song that caused 80% of its listeners kill themselves. Should that song be banned, or would you argue that free speech is more important?

I think most people would take the practical approach. We already have some minor constraints on free speech. You can’t yell “fire” in a crowded movie theater. You can’t defame someone in public. It would be no big deal to ban one particular song if the alternative was the death of millions.

What if the song killed fewer people? Would you ban a hit song that’s loved around the world if there was no doubt, statistically speaking, it would result in the death of ten people? We have that situation now, except it’s not music. Every time the media makes a big deal about a high profile suicide there’s a 100% chance it inspires additional suicide.

If anyone was wondering how Banksy managed his Guantanamo Disney stunt last year - he's put videos of himself carrying out japes on his website.

Jonathan Yuen won a Webby award for being amazing and creating beauty. Click here and you'll see why.

One of the great things about Firefox is that it's very configurable. If you want to tinker with the network settings you can. And everything goes faster. This is how. 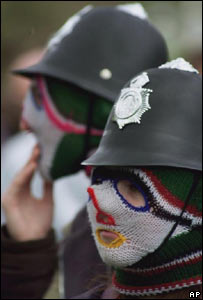 Dan had a blank placard and a determination not to explain what he was doing.

I just bumped in to him and was utterly confused as to what he was doing. But I wasn't half as confused as the police. It began with one officer, then two, then a whole van-load arrived. He was repeatedly asked what he was doing. Was he protesting? He said nothing. Did a silent man and a piece of cardboard need a permit? Eventually, he was left alone.

He is now planning to return with another 40 or so non-protesters to stage another non-protest about nothing.

And I thought this was a great picture: 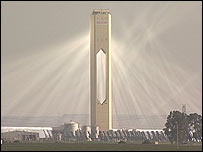 The article it came from is interesting too.

As usual I've been working 22 hours a day, only taking occasional breaks to sit in the sun, attend 2000AD's 30th birthday bash, visit the Cartoon Museum and eat.

I haven't had any comments here for a while... Tell me what you're up to.
at May 03, 2007
Email ThisBlogThis!Share to TwitterShare to FacebookShare to Pinterest