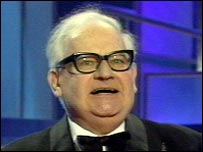 I’ve been out of the news loop for over a week so I only just found out that Ronnie Barker has died. The Two Ronnies, Porridge and Open All Hours are three of the funniest things to have graced British television screens, and they were all firm favourites in my home when I was growing up.

In the last couple of years I have particularly enjoyed the late night UK Gold repeats of Porridge and Open All Hours. They stand the test of time in a way that few others shows, especially comedies, have.

My favourite Ronnie Barker story is this one:

The burning question among producers and writers on The Two Ronnies was what was the true identity of the reclusive Gerald Wiley. Having just completed another successful series of the show, the team behind the Two Ronnies was invited to a Chinese restaurant in the early 1970s. This was a meal few of them wanted to miss, given that the request came from the mystery man who had written many of the sketches.

The show had operated an open-door policy for writers, so all submitted suggestions were considered. Barker and Corbett went through them and rated them as if marking schoolwork, with an A, B+, C etc. The producers noted that some of the best sketches came from a man called Gerald Wiley, a writer first credited for a sketch on Frost on Sunday.

He had a particular knack for clever wordplay and his work included the famous "fork handles, four candles" sketch later voted the best ever in a television poll. In it, Corbett plays a shop assistant trying to understand what Barker's customer wants.

The hunt for Gerald Wiley became a great game, says Barry Cryer, who was one of many writers for the series, and who attended the restaurant.
"We had accused Frank Muir and also pointed the finger at Tom Stoppard, who had the same agent," he says.

"Wiley was a recluse and wouldn't come to meetings, so people cancelled appointments just to get to the restaurant. No-one wanted to miss it."

When Ronnie Barker stood up and said 'I'm sorry, it was me,' he was told to sit down again, recalls Cryer.

"It was a big joke that everyone had claimed to be Gerald Wiley, so no-one believed Ronnie and he had to stand up twice. It was quite a moment when his cover was blown."

He had even turned down one of his own scripts, saying "Wiley's lost it, I wouldn't do this one" to maintain his cover, says Cryer, he was so determined his work be accepted on its own merit.

And some great lines of his can be found here.
at October 13, 2005
Email ThisBlogThis!Share to TwitterShare to FacebookShare to Pinterest