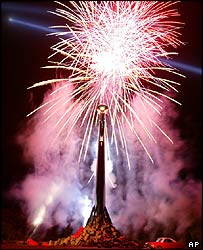 The ashes of gonzo journalist Hunter S Thompson have been blown into the sky from a cannon in Aspen, Colorado.

Friends and admirers had gathered for the event at the writer's US home, six months after he shot himself there.

His ashes were fired from a 150ft tower topped by a red fist with two thumbs - the symbol of Thompson's free-wheeling, first-person gonzo journalism.

Johnny Depp, who played Thompson in the film of his book Fear and Loathing in Las Vegas, paid for the cannon.
at August 21, 2005
Email ThisBlogThis!Share to TwitterShare to FacebookShare to Pinterest